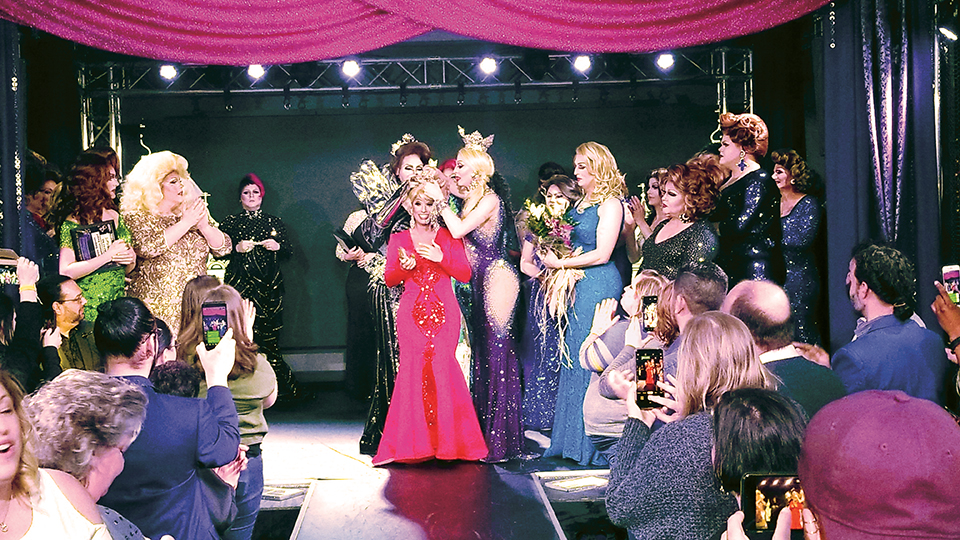 The theme for the soon-to-be rescheduled 47th annual Miss Gay Missouri America pageant is “Viva Las Vega.” It’s an homage to the reigning MGMA 2019, Vega (John Michael Tabakian), who will give up the crown after a banner year as our state’s symbol of excellence. Pattaya Hart, Miss Gay America 2020 is expected to co-star.

Indeed, drag doesn’t get much better than this. With its marquee of performers and top-tier contestants, expect a lavish production and epic battle of the state’s top female illusionists.

A South Carolina native, Vega got her start in drag ten years ago after winning a local talent show at a Charleston bar and being asked to join their cast. But it wasn’t until Vega moved to St. Louis in 2018 that she got bitten by the pageant bug. She won the title of Miss Gay Springfield, which propelled the former competitive dancer to the state pageant and on to nationals.

“It was kind of a whirlwind to be honest,” says Vega. “All the prep and practicing and stoning that went into my package was as stressful as it was exciting. And then the pageant happened, and I felt so at ease because I had prepared so much for that moment. I still remember being in shock when they called my name as the winner, and it has been one of the proudest moments in my drag life.”

One of Vega’s favorite stories to tell is why she chose her stage name. While Vega is the brightest star in Lyra, it isn’t the brightest in the night sky, and that’s ever-present in Vega’s mind as a firm believer that there’s always room to improve.

“I am not one of those that think I am the best drag queen out there, and I continue to work on myself and Vega on a regular basis,” she explains. “Coming into this system and representing a great state came with a lot of responsibility and a tremendous amount of pride. I’ve now experienced pageants as a competitor and as an administrator, and that knowledge has become an invaluable asset in my career. Winning has also made me step up my performance level. I strive to always be my best and present someone who others can look up to.”

In 2018, St. Louis became the permanent home of the national Miss Gay America pageant, joining fellow “drag capitals,” including Louisville (Entertainer of the Year), Chicago (Continental) and Dallas (USofA). Vega sums up our city’s appeal with one word: diversity.

“I am from the south and had only seen one kind of drag, but coming to St. Louis and witnessing the whole spectrum was an overwhelming but eye opening experience,” Vega recalls. “I realized that not everyone does what I do and that was okay. St. Louis truly has a place for every type of performer.”

Last year was Vega’s first trip to nationals, and she dazzled audiences with her Britney impersonation, taking home the Miss Gay America Lady Barbara Award (best overall contestant not in the top ten). Vega hopes to return to the big dance. “But let’s just get through Miss Gay Missouri first.”

This year, sixteen contestants who qualified in preliminary contests from across the state will compete for one of Missouri’s oldest female impersonation crowns (Miss Fannie’s Ball, running strong since the 1960s, holds the record). The divas will duel it out in the categories of presentation, interview, evening gown, on-stage question and talent (the latter often includes sets, back up dancers and choreography) throughout MGMA weekend.

A Legacy of Excellence

Founded in October 1973 by “River Queen” Lana Kuntz, the very foundation of MGMA pageantry is cemented in St. Louis LGBTQ history. Born from the Mandrake Society’s annual Halloween Ball, the first contest consisted only of a walk-on gown and talent competition. But almost instantly the pageant born from the city’s first LGBTQ rights organization produced a platform that many a drag performer embraced to serve their community.

In 1974, Lana’s twin brother and fellow “River Queen” Donna Drag took over the fledgling franchise, crowning a host of dynamic performers. Five years later, the baton was handed to “Sex, Inc.” The comedy drag trio produced the pageant for the next eight years, turning MGMA into the largest attended LGBTQ event in St. Louis. For three years running, the pageant attracted more than 1,000 people and the quality of contestants kept pace with the ever-growing crowds.

MGMA has been owned by a number of entities since 1987 — from the Miss Gay Missouri Alumni, and Daniel Flier (Vanessa Vincent, MGMA 1982) and Chuck Atteberry (Sex, Inc.) — to Joie DiMercurio (Tumara Mahorning, MGMA 1992). For the past ten years, the MGMA Alumni Association has owned and operated the pageant. (The Board consists of several former MGMAs and the reigning title holder).

The duties of MGMA mirror those of the national title holder — the winner of the coveted sash and crown not only performs at but administrates the system’s many preliminaries throughout the Show Me State.

“As a new resident to the state, I was eager to get out and just see everything,” says Vega. “Along with my regular job, drag has afforded me the opportunity to do just that. I have thoroughly enjoyed not only performing in different cities but making connections with fellow performers and fans alike.”

Still, being MGMA isn’t all air-kisses and roses. According to Vega, it’s important to have a strong support system.

“There are so many out there that root for you to succeed, but when you do, have nothing but negativity to give,” offers Vega. “I used to think that I had thick skin and could just brush things off, but this year I leaned on my husband Ryan more than ever. I learned that it’s okay not to be the rock all the time, and I am so fortunate to have someone in my life that can take up that responsibility when I am unable. I hope that I have left behind at least a little inspiration,” Vega concludes.

“For anyone out there that sees a pageant and says, ‘I want to try that one day,’ because that is exactly how I felt at one time. I hope that people will remember me as a kind person even in the face of adversity, and I hope that I can offer support and guidance to our new incoming MGMA as well to the system for years to come.”

Free to Be You and Me

In the early days of Shameless Grounds, there was confusion. Michelle Mueller, who co-founded the business with her husband Andrew...