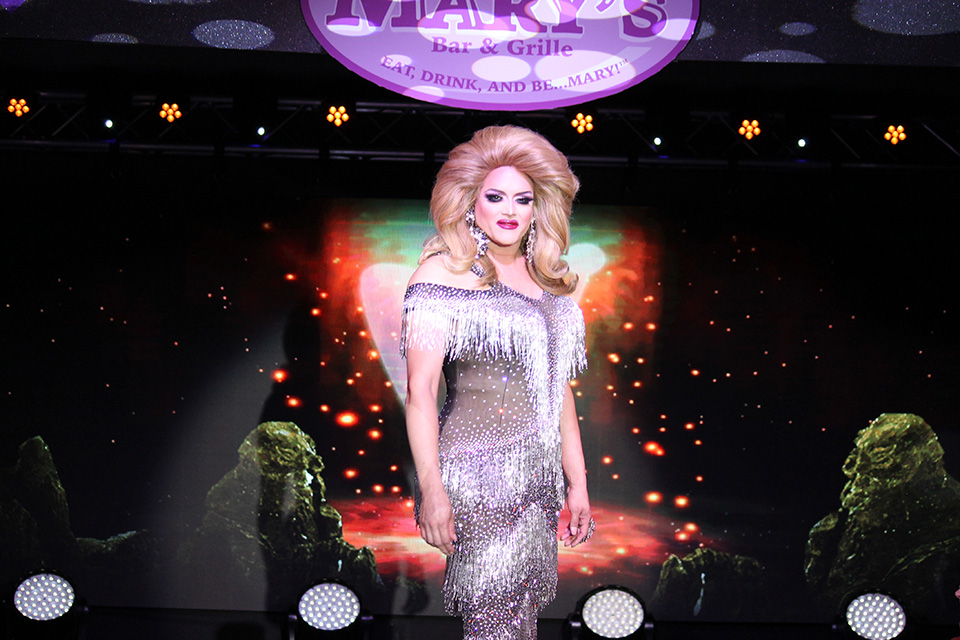 Pretty much everyone likes burgers, right? Even vegetarians have great options in the burger department these days. So it stands to reason that a campy, friendly burger spot with a drag theme, a menu full of puns and a philanthropic mission would be a big draw.

And while, yes, it’s a gay-owned establishment with a drag theme, it’s not a gay bar per se. It’s an unpretentious theme restaurant, a place to get some giggles with your brunch.

“It’s an opportunity for multiple communities to come together and celebrate whatever you’re celebrating,” says Michael Dutzer, one of the owners of the St. Louis location.

You can do that celebrating over a host of burgers including the “Hawaiian Hula Girl,” which comes smothered in cheddar and jack cheeses with pineapple chutney and a teriyaki glaze; the “Queen Mary,” with caramelized onions and bacon; or “Buffy the Burger Slayer,” which is topped with fried onion strings.

There are also appetizers, salads, flatbreads and desserts. Yes, this includes a deep-fried Twinkie. And yes, on the menu it’s “Deep Fried Twinks.” If you like deep-fried pickles (and if you don’t, why do you hate fun?), you’ll love the “Britney Fried Spears,” a serious commitment to dill, ranch dressing, crispy coating and puns.

Each burger can be made with fresh beef, turkey or chicken, or one of two veggie options (black bean or the Impossible Burger). No matter what your protein, this isn’t pinky-raised eating. A “Hula Girl” made with a black bean patty, hold the bacon, absolutely defeated your humble correspondent.

“They build the burgers big and over the top — kinda like the drag queens!” says Dutzer. It’s an apt comparison: The burgers are both delightful and almost caricatures of themselves. Come hungry.

Hamburger Mary’s is, of course, a chain restaurant. It began in the early 1970s as a kooky, friendly LGBT spot in San Francisco. There are currently seventeen locations in the U.S.

The franchise first came to St. Louis in 2012. The restaurant operated in Midtown for a few years until the then-owner was charged with (and pled guilty to) stealing from his partners. At the beginning of 2018, the restaurant returned with new owners.

Dutzer and his husband Rob Mansman, who live in Baltimore, own the Miss Gay America pageant and had been looking for a permanent home for the event — the nation’s oldest and largest female impersonation pageant. They sought a venue that could be big enough to seat hundreds, and with their St. Louis-based business partner David Pardue, they decided to move a Mary’s franchise into the 10,000-square-foot Washington Avenue space.

The shows are kept family friendly, Dutzer explains, with attention paid to keeping language and themes from being too crude — at least before the 11 p.m. show. The five drag queens in residence, as well as other featured local performers, are ready for drag aficionados and novices alike.

There are plenty of options to interact with the queens, including Sabrina White, who moved here from Baltimore, and Nina DiAngelo, who moved here from Minneapolis just to zhush up your brunch. Every Tuesday at 6 p.m., come for bingo. Prizes are generally donated, and the kitty goes to raise funds for each week’s selected charity. Fridays and Saturdays, it’s Dining with the Divas, with a variety of showtimes including the raunchier late-night “Mary’s After Dark” show at 11 p.m. on Saturdays. Diva Brunch on Sundays has the option for bottomless mimosas or a build-your-own bloody-mary bar.

Drag queens, of course, are having a moment. They’re on TV, they’re volunteering in hospitals and libraries, and they’re even reading to young kids at story time. In a sense, they’re serving as cultural ambassadors.

“It’s good for young people to see people with confidence,” Dutzer says. “There was a time you wouldn’t leave the bar; you’d be beaten up. There’s a statement being made when you go out in public like that. It shows people there’s a level of confidence that it takes to go out and do that.”

That’s even though about half Hamburger Mary’s clientele isn’t even part of the LGBTQ community.

“I think it provides a platform to join people together,”
Dutzer says. “We make it fun for young and old. You can celebrate anything — getting a divorce, getting married, getting a night out on the town. That was our goal, and I think we
accomplished it.”  ° 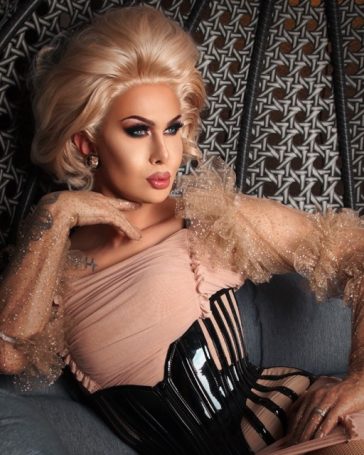 Initially, Andrew Black was seeking solace. His mother had just died, and he was at a loss. “I was processing...