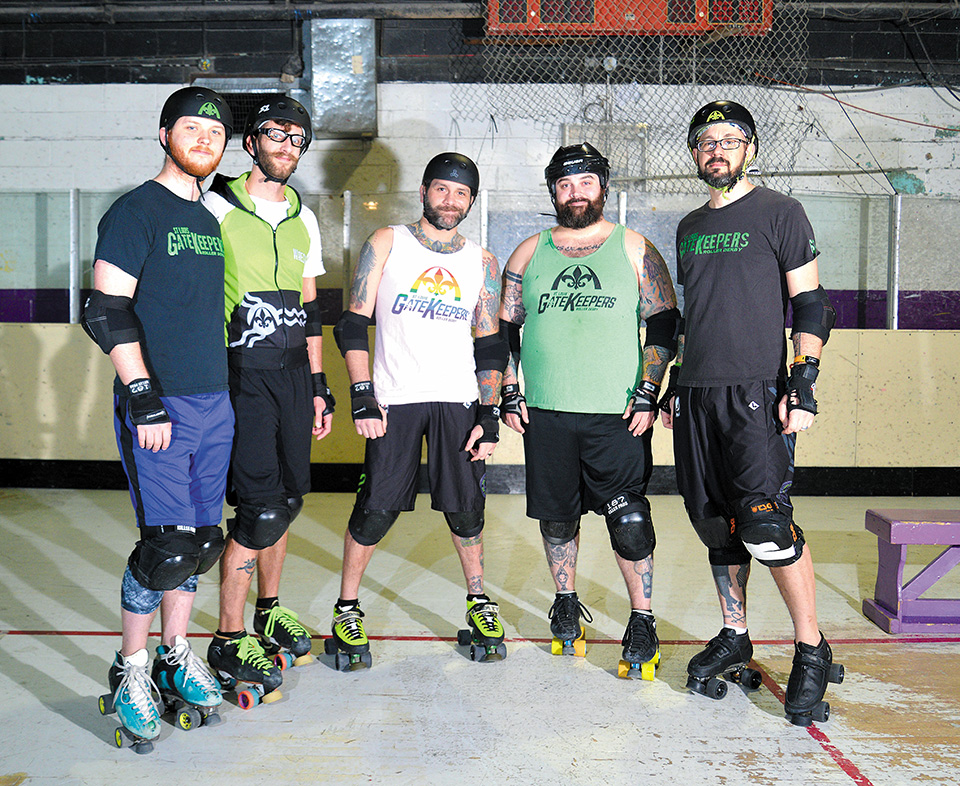 Initially, Andrew Black was seeking solace. His mother had just died, and he was at a loss. “I was processing trauma in my life, looking for a distraction,” Black, now 40, recalls. A middle school teacher by day, Black went along with a friend one evening to practice with the St. Louis GateKeepers, which at the time was a newly formed men’s roller derby league.

Up until then he’d been focused primarily on individual sports like track and bicycling, but the team aspect of roller derby and the sense of community grabbed him from the start. Unfortunately, so did gravity: At that first practice, he fell and broke his tailbone. “I’d never even touched skates before,” he says. But Black didn’t let himself be deterred. After his recovery, he stayed at it, practiced six nights a week and made the A team within a year.

Jared Bennett, a pharmacy tech, didn’t lose a parent or break any bones, but the path that brought him to the GateKeepers was no less dramatic. He discovered roller derby at age 24 in Omaha, his hometown. “A girl I knew on the women’s team told me it was super fun,” he says.

It didn’t take long for Bennett’s skills to surpass the Omaha league. At that point he set his sights on the GateKeepers, which, even if it’s barely known beyond its loyal fan base of family members and friends, is to ambitious and talented male roller derby players what Carnegie Hall is to musicians who dream big. So, in spite of not knowing anyone in town, Bennett, now 28, moved to St. Louis.

The St. Louis GateKeepers is one of 60 leagues from around the world that belong to the Men’s Roller Derby Association (MRDA), the international governing body of men’s flat track roller derby. In addition to being on a 45-game winning streak that’s spanned more than four years, the GateKeepers’ traveling team has won four of the eight championships played since the MRDA was founded in 2011.

Tony Correnti, a real estate analyst, has been there from the beginning. A good friend initiated him into the world of roller derby when the St. Louis female league needed referees. Correnti, 36, says he practically grew up at roller skating rinks, but readily admits he’d never really played sports — or refereed them.

It didn’t take long for a few of the referees to form a men’s team, and in 2009 the GateKeepers became official. Correnti became the head of a committee, then captain of his home team. The next stop on his trajectory was a stint on the board of directors, then captain of the travel team and, ultimately, president of the league he’s been a part of since its first practice.

Reflecting on a decade of roller derby, Correnti says that while he loves the sport, it’s the people who keep him dedicated to a life on wheels. “I’m competitive, but for me it’s more about the brotherhood,” he says. Gathered around a table in the back room of a Carondelet pub on a cold Wednesday night in late October, Correnti grins at Bennett and Black. “These are my best friends,” he says. “My family.”

He’s not speaking euphemistically. He met Black while playing and practicing with the GateKeepers. On July 4, 2015, they got married.

The GateKeepers have an obvious penchant for winning, but they’re also better than most other MRDA leagues at attracting and retaining a sexually diverse group of players. The league has an active roster of between 40 and 50 players, and Bennett, Black and Correnti estimate that one-quarter of them identify as something other than heterosexual.

And while that sexual diversity isn’t part of the GateKeepers’ brand per se, it’s not a secret either — not even in Omaha. “In addition to being a great league, I knew Tony was president and that he was married to Andrew, that there were other queer skaters and that everyone got along,” Bennett says. “For me, it made St. Louis the place to go.”

Correnti believes inclusivity plays a big role in the team’s appeal to queer players. It has in fact been an important part of the GateKeepers’ DNA since the first league meeting nine years ago. “Inclusivity wasn’t intentional — it was simply a value we inherited from the women’s league, and we’ve never lost it,” he says.

The GateKeepers inherited more than values from Arch Rivals Roller Derby, the area’s Women’s Flat Track Derby Association league. Men’s roller derby is slowly catching on — even ESPN has taken note — but it’s still a niche sport within a niche sport. In a way that quietly counters the standard athletics narrative, the men in roller derby follow the lead of women, who for the most part dominate the conversation and the coverage.

Just ten years ago, men who participated in roller derby did so in support roles. Today, the St. Louis league’s female roots are hard to miss. “We are sort of granola,” Black says.

But, he quickly adds, on a serious note, that the league’s perspective is informed by being in the minority. “We’re men playing a women’s sport,” he says. “We understand the importance of empowerment and acknowledgment of all voices.”

Not long ago, in response to a few inappropriate interactions, the GateKeepers joined forces with Arch Rivals to draft a sexual harassment policy. In January, the GateKeepers held a mandatory workshop that was led by a facilitator from Safe Connections and attended by more than 40 people.

“In the beginning, our only rule was that you could not be a douchebag if you were wearing the GateKeepers’ logo,” Correnti says. “But we’ve grown, and when it came to sexual harassment we wanted to be at the front of the conversation. We want to help people grow personally as well as athletically.”

Bennett says he’s definitely grown on a personal level since joining the GateKeepers. “Our practices are tough physically and mentally, and I’m always asking myself if I’m good enough to be on the team,” he says.

Believing that he does in fact belong has made a huge difference. “More than anything else, roller derby has given me self-confidence, joy, friendship and made me stronger in all aspects of my life,” Bennett says. “Since starting I came out to my parents and I fell in love. I told him, ‘Listen, I love you, you might be number one, but you’re tied with derby …’”

Black echoes Bennett’s sentiments about confidence. “I’m completely out at school, and I don’t bat an eye in my classroom,” he says. “It’s given me the confidence to get through some difficult situations. I’m just not easily intimidated.”

In addition to confidence, roller derby has given Black a sense of hope, mainly by welcoming to the track people with views that simply do not align with his own — people he would not otherwise encounter in today’s polarized environment. He cites one teammate who came to the league with attitudes and outlooks that were anything but inclusive, but whose journey, guided in large part by roller derby, has transformed him into a person who contacted Black after the 2016 massacre at the Pulse nightclub in Orlando to ask how he could show solidarity. “These are people I would trust with my life,” he says, “and every single time I step on the track, I do.”

Patrick Collins is a St. Louis native who is reacquainting himself with the area after living elsewhere for many years. You may reach him at pword3[email protected] 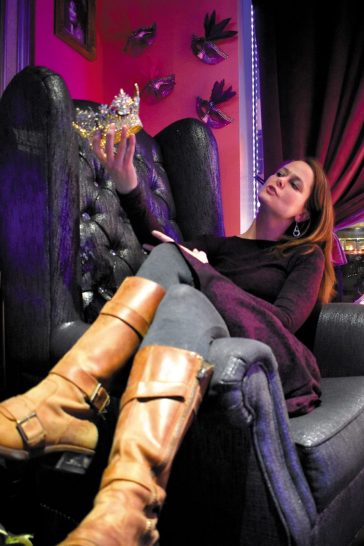