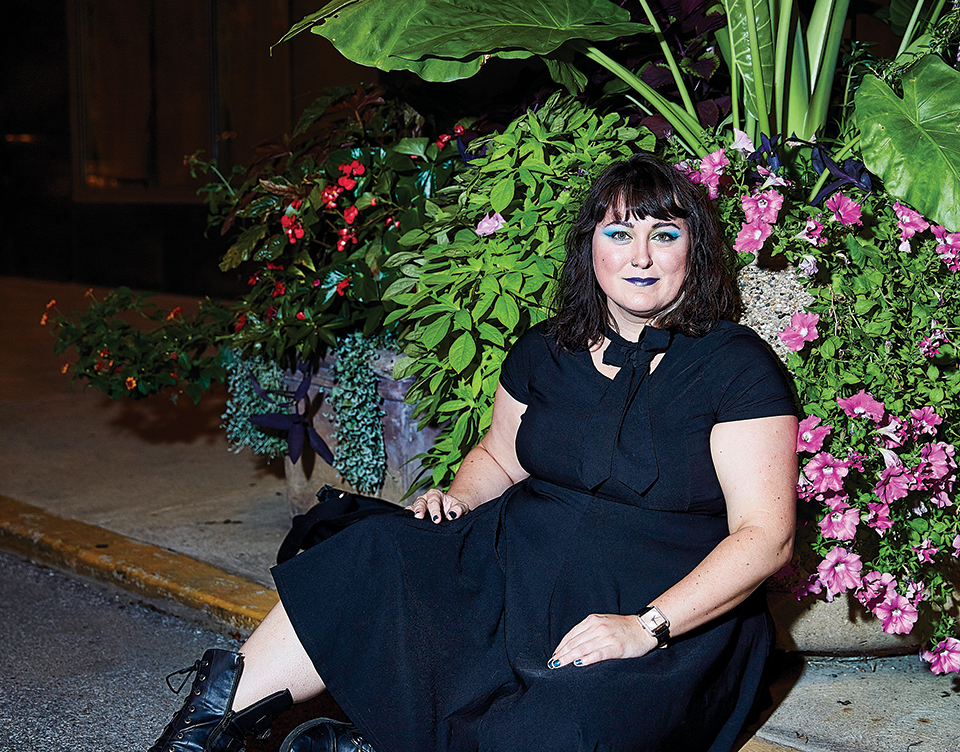 On a rain-threatening Wednesday night in August, the Crack Fox downtown has a few indicators that something unusual is happening inside. A hand-lettered sign bears the quote people posted in the ’70s supporting Angela Davis: “Sister, you are welcome in this house.” Another right by the door handle is less subtle: “No Men.”

Inside, past the woman checking IDs and collecting fivers, past a sight-obscuring screen, there’s a bondage cross on the stage and a spanking bench among the booths. The people inside include cis women, trans women and non-binary people, but absolutely no men — the sign isn’t just for show.

And it’s as safe and nurturing as a space for potentially getting your ass whooped can possibly be.

Venus in Furs is the love labor of Elizabeth Van Winkle. Van Winkle, 34, has been putting on weirdo drag shows and social events for years, making space for artists who might be too edgy for brunch at a chain restaurant.

You probably follow her on social media, too — her GutterGlitter page on Facebook has more than 10,000 likes, promoting her events and posting anti-racist, anti-facist content alongside sexy memes about capybaras.

Her posts get her put in Facebook jail often enough that she’s got contingency plans in place for when it happens. The most recent offense was an image of two women of color holding a sign that says “White Men with Guns are America’s Biggest Terrorists.

Van Winkle arrived in St. Louis as a teenager, leaving behind a deeply conservative small-town upbringing. She’d hoped to find a big-city utopia.

“I was a super naive kid when I came to St. Louis,” she says. “I thought that there would be no racism or homophobia or transphobia.”

Instead, she says she found a fractured and hierarchical scene, even among queers. Her disappointment turned out to be a galvanizing force for her.

“Whenever Ferguson happened and Michael Brown was killed, I was just appalled at drag performers who came out anti-Black Lives Matter,” Van Winkle says a few days before the party over vegetarian slices at Pizza Head in south city. “I was like, ‘I’m never going to another drag show again.’”

GutterGlitter events and play spaces and parties can read as totally out there in St. Louis. On visits to San Francisco or New Orleans, though, Van Winkle sees her own vision repeated again and again in exciting, challenging, intersectional events. But don’t expect her to pull up stakes.

“The events that I throw have never ever happened here,” she says. She fears if she leaves, they’ll stop happening. She says she’s lost jobs over the events she’s produced and doesn’t want other potential producers or artists to face that fate. “It’s too risky, especially for young poor queers.”

The talk around the table is collaborative — it’s not a lecture, though Van Winkle is clearly leading the conversation. Guests pipe up with their own, mostly terrible experiences with men in kink spaces, with more than one person talking about realizing that an uninvited man was inches away during a scene, leering.

In Van Winkle’s space, the word of the dungeon monitor is final. No appeals, no due process. If the monitor says you’re out, you’re out. Partygoers can be tossed for disrespecting their play partners, disturbing others’ scenes, crossing stated limits or messing with the vibe in general. If your behavior gives Van Winkle or another dungeon monitor the heebie-jeebies, you’re gone. In fact, she’s hoping to create what she calls a leather contingency, a kind of master list of persona non grata in play spaces that could be shared across parties and scenes citywide.

That’s not to say kinksters aren’t responsible for their own happiness. Partners need to negotiate explicitly and be upfront about their own expectations and needs. So if you don’t get the aftercare you crave from your top after a scene — and you didn’t ask for it ahead of time — it’s not the monitors’ problem.

“We will keep you safe, but we will not be monitoring every moment,” Van Winkle says.

In some play spaces, alcohol is expressly forbidden. It can really muddy the waters of consent. But Venus in Furs is in a bar, and the drinks flow — though booze is not the main attraction. Many at the party are sticking to water.

“It’s interesting how when there’s women and non-men out together, they’re not pressuring each other to drink,” Van Winkle says. “It’s kind of like the closest thing we have to a dyke bar, because there’s no men.”

At Venus in Furs, Harris says, “I see women playing a whole lot more than at my other events — definitely less inhibited.”

She got to know Van Winkle through producing events, and their shared focus on creating safe, fun, kinky spaces naturally led to the Crack Fox hosting Venus in Furs on select Wednesdays and Fridays.

In almost any dungeon with straight men included, she’d be chum in a shark tank, even as a lesbian with no desire to play with men. But there are no sharks at this party, and so she’s sitting by herself watching the action onstage. It’s almost jarring to see her not getting hassled.

“I don’t know if I would have been able to [attend] if there were men,” Scarlett says.”It’s hard enough given the power structure in society, and that I’m a femme woman. I couldn’t imagine being vulnerable in a space [with men],” she says.

Scarlett turns her attention back to the stage, where Van Winkle demonstrates how to use a flogger and a riding crop. She gives the woman on the cross several masterful smacks and whacks, and then hands each implement in turn to an increasingly less-tentative newbie. Between whimpers, the woman on the cross turns around to offer helpful hints.

Wendi and their partner have been together for a few weeks. The two sit close and occasionally nuzzle while filling out “yes no maybe” cards they brought, ranking kink and play they’d like to engage in: nipple torture is a yes, but scenes involving mental hospitals are a hard no.

“A lot of the time in kink spaces, men have a hard time with consent,” Wendi says. “I’ve only met a couple of men in the kink scene who know how to act.”

For Wendi, though, kink spaces are critical to their identity. “Kink was the thing that made me comfortable with sex. I’m not binary,” they say. So a space with no men is a relief and a haven.

Several times throughout the night, men try to enter the space and loudly protest when they’re refused. When I head out to catch my Lyft, the “No Men” sign has been pulled off the door and is getting soggy on the sidewalk in the rain that’s finally started.

I paste it back up before heading home.

Letter from the Editor: Chris Andoe

If you’ve been around the St. Louis scene a while, what I’m about to say might make you feel really...