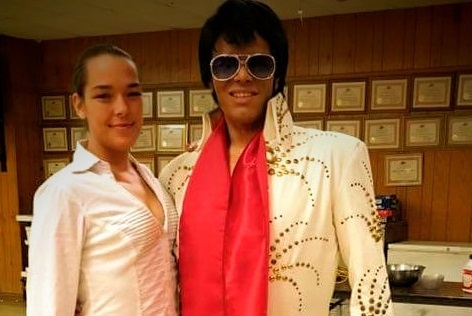 Stephanie and Daniel Cardona had a bizarre run-in with Dustin Mitchell in Dallas. (Photo courtesy of Stephanie Cardona)

This piece is an addendum to our longform feature, “Dustin Does Dallas,” which appeared in our Spring 2018 issue.

On June 28, 2017, police near Dallas, Texas arrested Dustin Mitchell, a former St. Louis-area con man, for falsely presenting himself as an attorney. He spent six hours in jail, then his wife bailed him out.

And that wasn’t even the wildest thing to happen to him that day.

A few hours later, Dustin Mitchell went out for drinks with some new friends, Stephanie and Daniel Cardona.

It spiraled into a shitshow of monumental proportions. 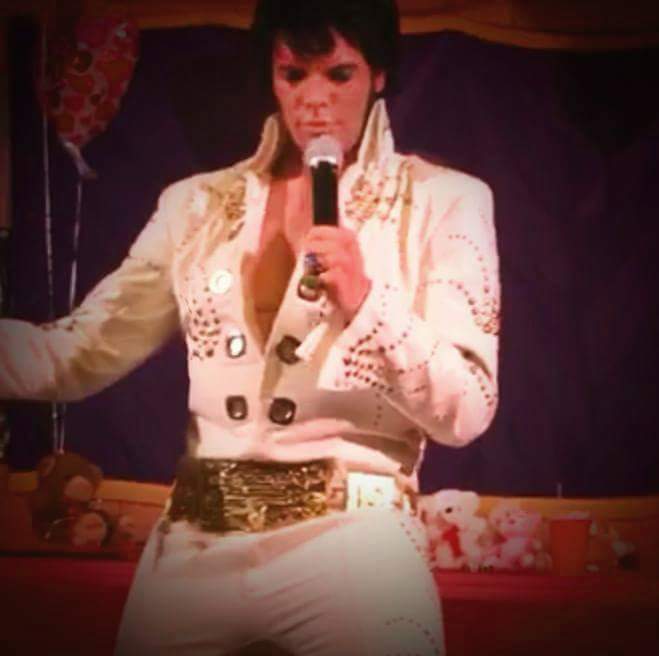 Daniel Cardona works as an Elvis tribute artist and also bartends. He believes Mitchell had Stephanie committed, in part, so Mitchell could pursue a sexual encounter with him. (Photo courtesy of Stephanie Cardona)

Daniel Cardona was an attractive Elvis tribute artist in Dallas. Mitchell had become a fawning devotee on his Facebook page and invited the performer to apply for a bartending position at Nicola’s, the restaurant Mitchell claimed to have an ownership stake in. Daniel went there to inquire.

“I walked in and he was in a waiter’s outfit, which I thought was odd,” Daniel recalled in an interview with Out in STL. “But he seemed to be in charge. It’s the authoritative way he carries himself.”

Mitchell interviewed Daniel in the bar area, then sent him to be interviewed with another man, who he says asked the same exact questions before offering him the job.

Mitchell learned that the Cardonas had brushes with the law, and that Stephanie Cardona was engaged in a custody battle so toxic that her attorney warned her of the possibility that neither she nor her ex would get custody of their five-year-old son.

Mitchell offered Stephanie some legal advice, and offered to take custody of her son, whom he’d never met.

“Dustin suggested I give him temporary guardianship of my son, saying that it would look good to the judge,” Stephanie said. She found the offer strange, but didn’t give it much more thought.

On the night last June that Mitchell joined the Cardonas for drinks, however, his proposal took a darker turn.

“He was pretty sauced up when he arrived, putting on a big show about where he’d been and how much money he’d dropped,” Daniel said. “He was talking about how he was a judge and a lawyer and how his wife was going to be the next governor of Texas. But then he brought up his custody plan as if we’d agreed to it.”

Reportedly, Mitchell looked at Stephanie and said, “Here’s the deal we have to make. When we do this, you can have no contact with your son whatsoever. You will know nothing about him.”

“I was dumbfounded,” Stephanie recalled. “I never considered handing my son over to him, and this was creepy. I just got quiet.”

Later, as the bar was closing and the Cardonas were leaving, Mitchell suggested they split an Uber, since they were headed in the same direction. Once in the car, however, Mitchell told the driver to take them to his townhouse.

The story the Cardonas shared about the events that followed was also recorded in sworn affidavits to the Frisco Police Department.

At the townhouse, Mitchell announced he was a clairvoyant. He insisted on examining Stephanie. He went upstairs and then returned wearing nothing but a white dress shirt with a live snake draped around his neck.

“He ordered me to a chair in the dining room against the wall,” Stephanie said. “He then forced me to sit down. He began asking a series of questions and claiming he could heal me. He then straddled me and insisted that I let him help me. I didn’t understand what he meant and became very frightened, and he proceeded with what he was doing anyway. He put his hand on my head shoving it against the wall, closed his eyes and asked me ‘What’s happening here?’ Startled by this, I replied, ‘I have seizures and a little bit of depression. Let me up.’ He held my head against the wall, still straddling me with his eyes closed, as though he was a faith-healing televangelist. He then opened his eyes, looked at me, and grabbed onto my left breast, and again asked, ‘What’s happening here?’”

This moment hit Stephanie especially hard, she explained, because she is a survivor of sexual assault and was also coping at the time with a very recent miscarriage.

Mitchell grabbed her vagina and told her she had never been pregnant.

“When I started to sob, he took his hand off my vagina and covered my mouth so that I could barely breathe. Dustin then stood, announced that the snake had determined I was possessed by a demon, and that an exorcism would be done. By this point my mind and body went into a block-it-out, shut-down sort of state and I was paralyzed by fear. With his hand still on my breast, I replied, ‘I have supraventricular tachycardia and I just had heart surgery. Please let me go.’”

Daniel had stepped outside, and returned to find Mitchell on top of his wife. 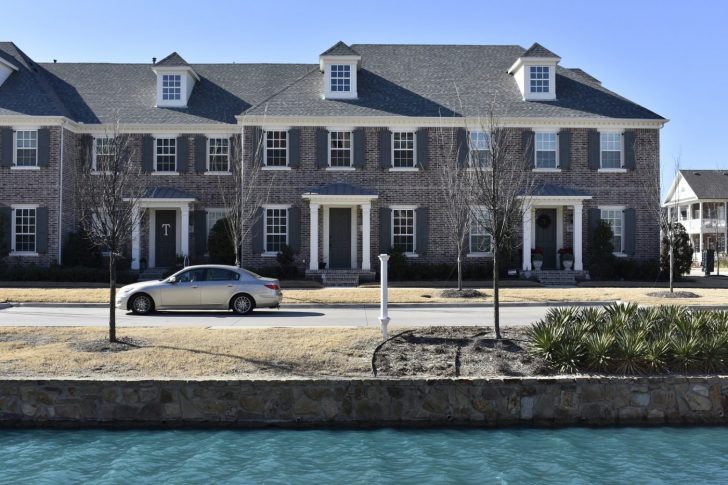 The elegant Canal Street townhouse in the Dallas area that Mitchell claimed to own, but in reality was just renting a room from someone on assignment in India. (Photo by Chris Andoe)

“He was wearing nothing but a man’s dress shirt, with a snake wrapped around his neck,” Daniel said. “Stephanie looked like she was barely breathing. I yelled ‘What the fuck is going on, man? She’s a sex assault victim! Take it easy!’”

Mitchell screamed at Daniel to go back outside, saying he had things under control and that he was helping her.

“He looked completely insane,” Daniel continued. “ I insisted that he get off my wife and let her up, but he acted like he couldn’t hear me until he turned and growled again for me to get out. It was pretty obvious the dude was not all there. I grabbed the cell phone off the counter and went back outside to call us a car to get us out of there. I didn’t care if I was going to have to fight this huge guy to do it. The situation was completely out of control.”

Daniel’s phone was dead, so he ran back inside. “Dustin was walking away from Stephanie mumbling something about a demon and an exorcism and Stephanie was crying really hard. I told him we were leaving and he went outside―still wearing nothing but the dress shirt and the snake.” Daniel said.

While outside, Mitchell called the Frisco police insisting Stephanie was violent, suicidal and needed to be forcibly committed. Police arrived to the townhouse (Mitchell put on pajama pants in anticipation of the arrival) and when Daniel would attempt to talk to the police and paramedics Mitchell would interrupt and say he was the couple’s legal counsel and they were not permitted to speak to them outside of his presence.

“He was not my lawyer, and I later found out he was not a lawyer at all, but he had told me he had just been elected a Judge in Denton County, so it felt pretty hopeless to argue. I was not ever able to tell any of the first responders on the scene that we had spent the evening terrorized by a mad man.”

Despite Mitchell’s insistence Daniel stay with him after the ambulance left, Daniel called an Uber and went to the hospital.

Like Daniel, Stephanie had concerns about not being believed due to Mitchell’s standing in the community.

The Cardonas had no idea Mitchell had been arrested earlier that day, but said the officers were very familiar with him, with one saying he’d been called to the home more than once for “the exact same thing.”

The next time Daniel saw him at work, Mitchell acted like nothing had happened.

The Cardonas didn’t tell their stories to the police until a few months later, after comparing notes with Mitchell’s wife, Lacey McCullough. Daniel says Mitchell was alarmed when he learned Stephanie and McCullough had been in contact.

Closing out his affidavit, Daniel said: “When our wives became friendly, Dustin went on another tirade, forbidding Stephanie and I from speaking to her with threats of prosecution, job loss, violence, and even death. When it came to the subject of his wife and stepson, Dustin was extremely irrational and easily agitated. He claimed everything from mafia affiliation to freemason affiliation as a way to get even and punish anyone who spoke to his wife without his permission. His wife found out anyway and left him and now he is lashing out at everyone and being scary and unstable.”

Daniel finished his story to police with this: “I need there to be a record of what happened before in case something happens again. This guy is unstable.”

Chris Andoe is the Editor in chief at Out in STL. You can reach him at [email protected]

On the morning of June 28, 2017, the doorbell rang at the luxurious townhome of Mr. and Mrs. Dustin Mitchell....