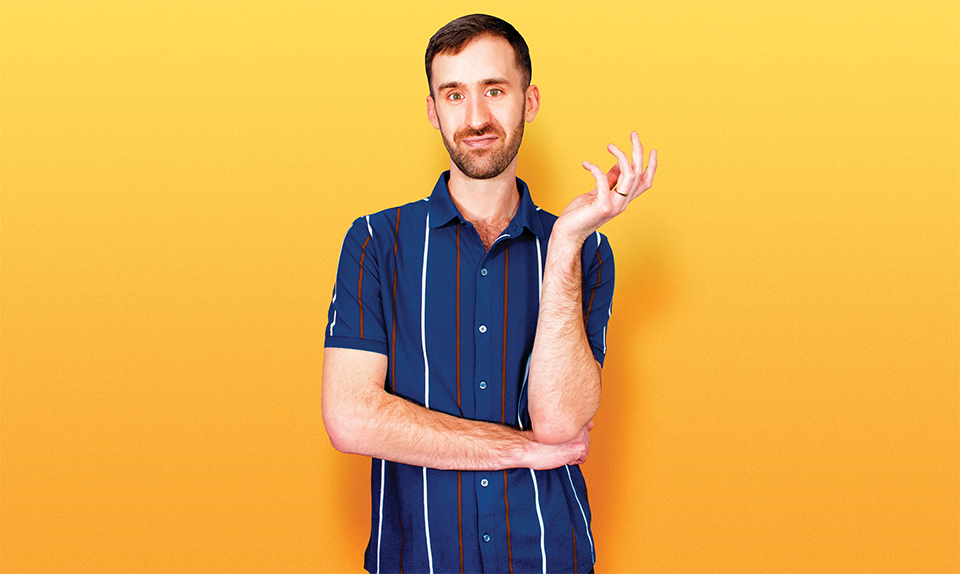 Eric Williams sees the gay in everything. Photo by Ryan Johnsen.

The best podcasts feel like being at a party with your cleverest friends, and Eric Williams’ That’s a Gay Ass Podcast hits the sweet spot. The podcast goes deep with comedians and celebrities, posting the provocative and fully tongue-in-cheek question: “Whose fault is it you’re gay?”

Muny Kids alum Williams is NYC-based these days but grew up in St. Louis. Early in 2020, he brought his two person one-man-show (it’s complicated) Ester & Eric home to the New Jewish Theatre. The podcast arose, like so many recent creative endeavors, from trying to figure out what the hell to do during quarantine.

“As the pandemic went on, all of my performance outlets had dried up,” says Williams.

Whose fault is it you’re gay?

He pivoted to social media, finding the thrilling in the banal. With At Home News, he broadcast insightful and nuanced commentary on all the dramatic things happening in his one-bedroom apartment with his husband. As the months wore on, they turned to watching classic movies. Watching Meryl Streep and Goldie Hawn quest for eternal youth in Death Becomes Her for the first time as an adult gay man was a revelation, he says, with previously unnoticed queer themes leaping out at him. Williams’ witty asides soon became Instagram fodder, ultimately inviting followers along for live watch parties.

“[The podcast] was an organic journey from videos I was making on Instagram: That’s a Gay Ass Movie, where I break down where iconic movies are gay as hell. I realized a podcast would be an amazing way to grow this idea,” he says.

I break down where iconic movies are gay as hell.

So far on the podcast he’s featured comics and celebs like Heidi N Closet from RuPaul’s Drag Race, as well as fellow St. Louisan Zach Noe Towers, who you’ve seen on Netflix and E! Williams’ conversational style is far ranging and invites his guests to reveal intimate details without ever edging into self-help treacle. Listeners and guests come away laughing but feeling like they’ve touched on important themes.

“I think that you don’t have to take something so seriously or with so much schmaltz to feel like you’re being seen,” he says. “What cultural touchstones do we have that shaped our passions and our worldview? It’s been an amazing experience to hear our shared experience of what specific memories we have.” Recent guest Emma Willmann (you’ve seen her on Netflix and The Late Show with Stephen Colbert) talked about going into the forest with a friend as a kid to hug and make out with trees — and her imagination filling in lady parts on the trees.

“I definitely have seen themes emerge,” Williams says of the interviews he’s done. “I think what every single person that identifies as LGBT has revealed is growing up confident in our perspectives and our passions, and then being told in our teenage years that is not the expectation of the world around you.”

Williams has mined his own experiences on the podcast, including some less than pleasant ones from his own childhood.

There is no shame in discussing what has been difficult for you, and growth.

“I talk about the bullying I experienced in high school, not just from classmates, from my own brothers,” he says. He talked it over with them before doing so, and they’ve all come a long way from their teenage selves. “It allows people to see there is an opportunity for growing up. There is no shame in discussing what has been difficult for you, and growth.”

Williams’ work, from the podcast to Instagram to Ester & Eric to his planned gay ass media empire, are all uniquely and deeply personal. And in a world with almost infinite entertainment options, that’s crucial.

It really is worth taking a risk when you’re leading with your truth and your vulnerability, and also being silly as hell.

“It’s been a lesson: If I embrace what is truly unique to me, that uniqueness will communicate a universal message,” he says. “Early on I’ve been shown it really is worth taking a risk when you’re leading with your truth and your vulnerability, and also being silly as hell.”

My quarantine began on the afternoon of January 4, 2020, when my boyfriend told me we needed to separate, that things weren’t...