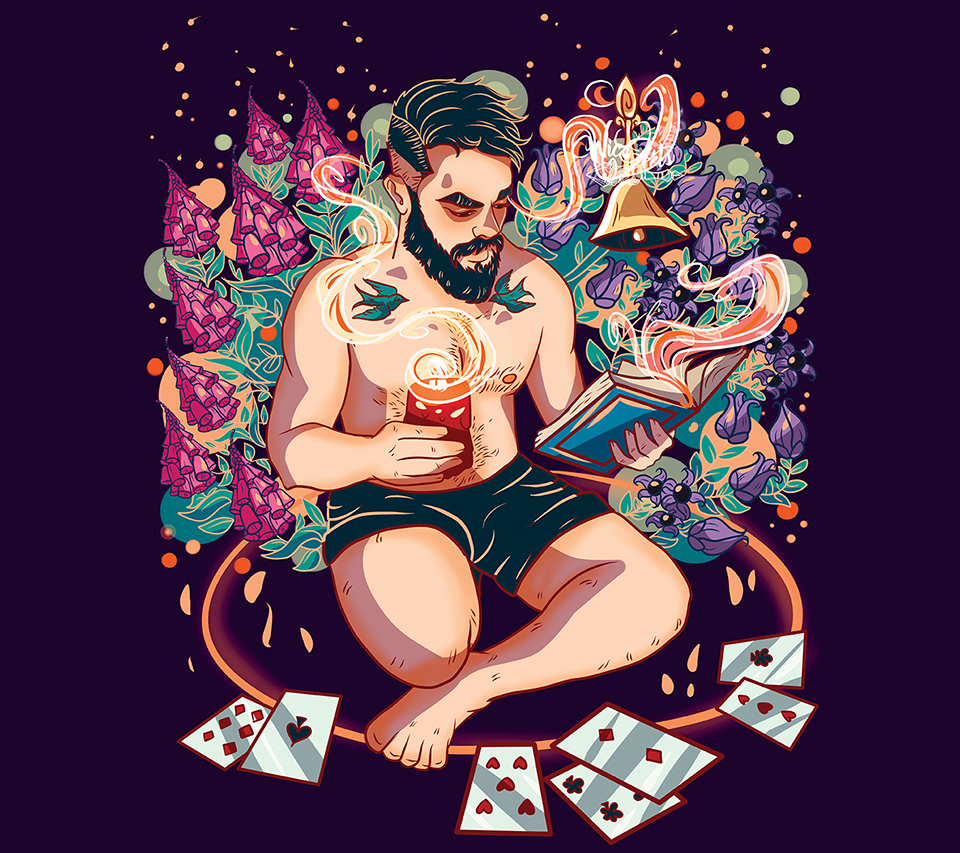 “I like these crackers,” said my roommate Zeeke Harris, 36, while happily munching on a multigrain wafer in the kitchen. “I give them as an offering to the spirits I work with. Ancient Greeks used to offer the first grains of the harvest.”

Living with a witch is interesting.

At 25, Zeeke left Dallas Theological Seminary and his position as youth pastor to come out of the closet as a gay witch.

“But how did witchcraft even get on the buffet of options?” I asked. “How were you introduced to it?”

An avid reader, Zeeke immersed himself in Wiccan literature. “The first was Wicca for the Solitary Practitioner by Scott Cunningham. “In it I found peace and substance.”

During a pilgrimage to New Orleans, he also became initiated in Haitian Voodoo in a wild three-day ritual. “Both Wicca and Voodoo are cultural systems of magic,” he said, “but Wicca is where I found my own power.”

I asked him to explain that power.

“Confidence in my own decisions and spiritual abilities. Witches are survivors. Can’t drown us, can’t burn us, can’t crush us!” he says. “The only way to heal the world is to heal ourselves first. Take responsibility for the way you treat people and the planet. Consistently working to love everybody.”

Beneath the dimmed crystal chandelier as shamanic music wafts through the air, Zeeke prepared for a card reading in the dining room. “I do a banishing of the reading area with a silver bell, incense and a white candle,” he said.

Zeeke reads oracle cards as opposed to tarot. “You have to build a relationship with the cards. Cards are like binoculars, they open the door to the event horizon. They connect to the underworld.”

I asked for examples of what he’s been able to reveal during the readings.

“I told a woman her daughter-in-law was pregnant when nobody had been told. I told someone their spouse was being emotionally unfaithful. I’ve told people they were in abusive situations. The cards lay everything bare.”

When asked if he’s ever read for someone who was the abuser in their dynamic he replied, “People with guilty consciences tend to avoid me.”

“Cursing is when the universe calls you to be God’s left hand. Sometimes you’re called to tip the cosmic scale, but magic has a cost. When you curse others you also curse yourself. You must decide if the cost is worth the action.”

In 2018, Zeeke was at a psychic fair in Alton when he met a woman who needed help with an abusive ex-husband.

“She had me work over an abusive ex who was causing problems with their children and who would harass her at home. He’d just walk in uninvited. I gave her red brick dust to put across the front and back doors. Red brick dust protects from evil intent,” says Zeeke. “After that, he wouldn’t even get out of the car when dropping off the kids. I later lit a seven-day candle and said a prayer to Saintisma Muerta, the patron saint of death, to make him think about what he had done. By the third day, he fell into a deep depression and became sick. I panicked and blew out the candle.”

As far as the blowback from the curse, Zeeke said he had a few nights of restlessness and disturbing dreams.

The Coven and the Afterlife

Zeeke explained that a central purpose of a coven is to serve and protect the community.

“A coven is a gathering of witches, normally thirteen, who gather during the full moon and sometimes during the new moon,” he says. “They work on spells for the community to bring peace and bring healing. Bringing protection to those who need it.”

Knowing witches don’t have typical western beliefs on heaven and hell, I asked what he believes will happen when he dies.

“I believe when you die you go to an area to review your life and relax, decompress and then come back,” he said. And he believes you come back as many times as it takes to learn what you need to learn. “Once you’ve learned all the lessons you become the Mighty Dead. Ancestors of the Craft. The protectors and guides of the people walking
the path.”

And speaking of the dead, Zeeke’s eagerly awaiting Halloween.

“That’s our New Year, and there will be a full moon on Halloween this year,” he said. “It will be a busy night for me I think.”

Pride St. Louis is excited to announce the entertainment lineup for Virtual PrideFest 2020. This first-of-its-kind STL Pride event will...