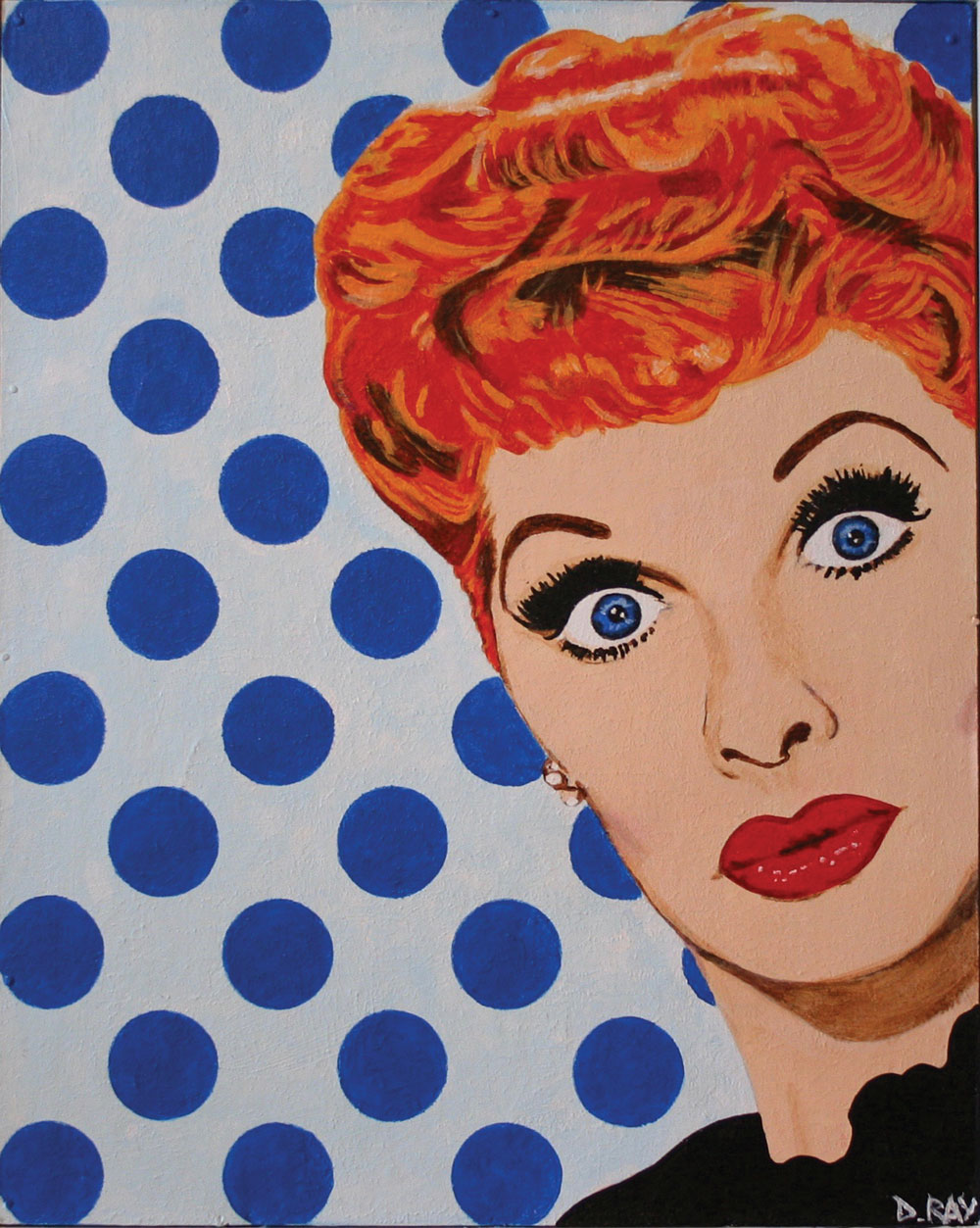 On a gray drafting table speckled and smudged with blue, orange, red, and white paint lays a pencil sketch of a buxom doll in platform heels plucking bubbles from the air. Next to the sketch is artist David Rantz’s newest painting. The details at this stage are few. Her hair is a blonde bouquet of curls, she wears a pair of purple elbow-length gloves, and her lips are a blank canvas pout. But the process is what Rantz defines as one of his signature techniques: A Diva’s Eyes.

“I try to get the eyes and the mouth out of the way first because they are the hardest to do,” he explains.

“I can make up my own colors and shadowing and that is maybe what attracts me to these divas because I can exaggerate a Cher cheekbone or the shadows on Dolly Parton,” he adds. “I like to keep to icons.” And in true Rantz style, even in this early draft, our bubbly blonde already resembles Amanda Lepore.

Like the painting, Rantz’s profile is a work in progress. Now based in a Dutchtown studio, he moved to St. Louis from Southern California thirteen years ago. He came to painting much later.

“I was always scared to paint,” says Rantz.

As a child, his first medium was colored pencil, and he often sketched and drew replications of his photographer and artist mother’s work.

“Growing up my mom had her own dark room in the garage my dad built,” Rantz says. “I would sit and watch amazed how she could take a photo of a washed-up boat on a beach and do things with chemicals to make it look sepia, and I would take the photos and draw them with pencil and add pastel colors.”

A brief detour at graphic design school and a fifteen-year hiatus from the art world led Rantz to St. Louis, where he picked up creative work designing ads and fliers for the burgeoning queer arts scene. Some accounting work and a steady stint at South Grand’s Cheap TRX supported Rantz, but the paintbrush remained untouched until someone asked him for a custom painting last October.

An eye for social media and a close relationship with gay bar owners who showcase his pieces has helped fuel his commissions. He laments a drawback to being an in-demand commission artist: telling potential new clients that he has to add them to the bottom of his list and that inventory for any future exhibition will be hard to gather, as his works sell fast.

“I still have some say-so over the commissions,” says Rantz. “I have to find something that speaks to me in some way in the painting. I was always drawn to sketching divas and that’s what I get requested most by people.”

Rantz’s work is situated squarely in the iconography of queer and gay divas with paintings of Cher, Elvira, Madonna, Josephine Baker, Ariana Grande, and yes, even local drag legends Jessica Leigh Foster and Maxi Glamour. Looking at each painting, one begins to feel what Rantz describes as the “texture” of a diva.

“I sit with an image and I blur my eyes and all these details begin to pop out at me,” says Rantz. “I might see the highlight on the nose or the sparkle on the ear and those become the things I have to paint. I’m inspired by drag queens like Maxi Glamour, and their image just jumps out at me and I want to paint all that wonderful color, or another queen I may want to paint because I feel like I’m doing makeup on a painted version of their face.”

The journey to becoming an artist is also full of self-discovery. For Rantz, the lessons he has learned in his new medium range from trial and error with different brushes to how to thin out acrylic paints on a canvas.

“My best friend is a wet napkin!” says Rantz with a laugh. “Acrylics are so forgiving because if you mess up you can just cover it up, but with pencil drawings you can’t do that.”

“And I am starting to see other things in paintings I’ve never seen before,” he continues, “so I’m seeing everything in teeth now! Like the color of the gums. I’m still having those revelations and still learning every time I’m doing a painting.”

Rantz says he has always called his work Pop art.

Rantz radiates the irreverence and proud legacy of queer camp. A collage of tattoos adorns his body — Wonder Woman, the doe-eyed fish from Xanadu, and even the words GOLD STAR across his knuckles — even as shelves of Cabbage Patch Kids sit in his studio.

He has high hopes for the trajectory of queer art in St. Louis.

“There is so much power in St. Louis,” says Rantz. “Artists are becoming more raw because they are being pushed out of their communities. We have such an amazing group of artists who support each other, from painters to burlesque performers to drag queens, they are not scared and they are doing what they do because they love it. Here we support our arts community.”

Strike a Pose: St. Louis has a storied ball scene — and its stars are ready to strut their stuff at Pride

It was 2001 when Mechee Harper took her nineteen-year-old friend Meko Lee Burr to Chicago for his first ball. “We...