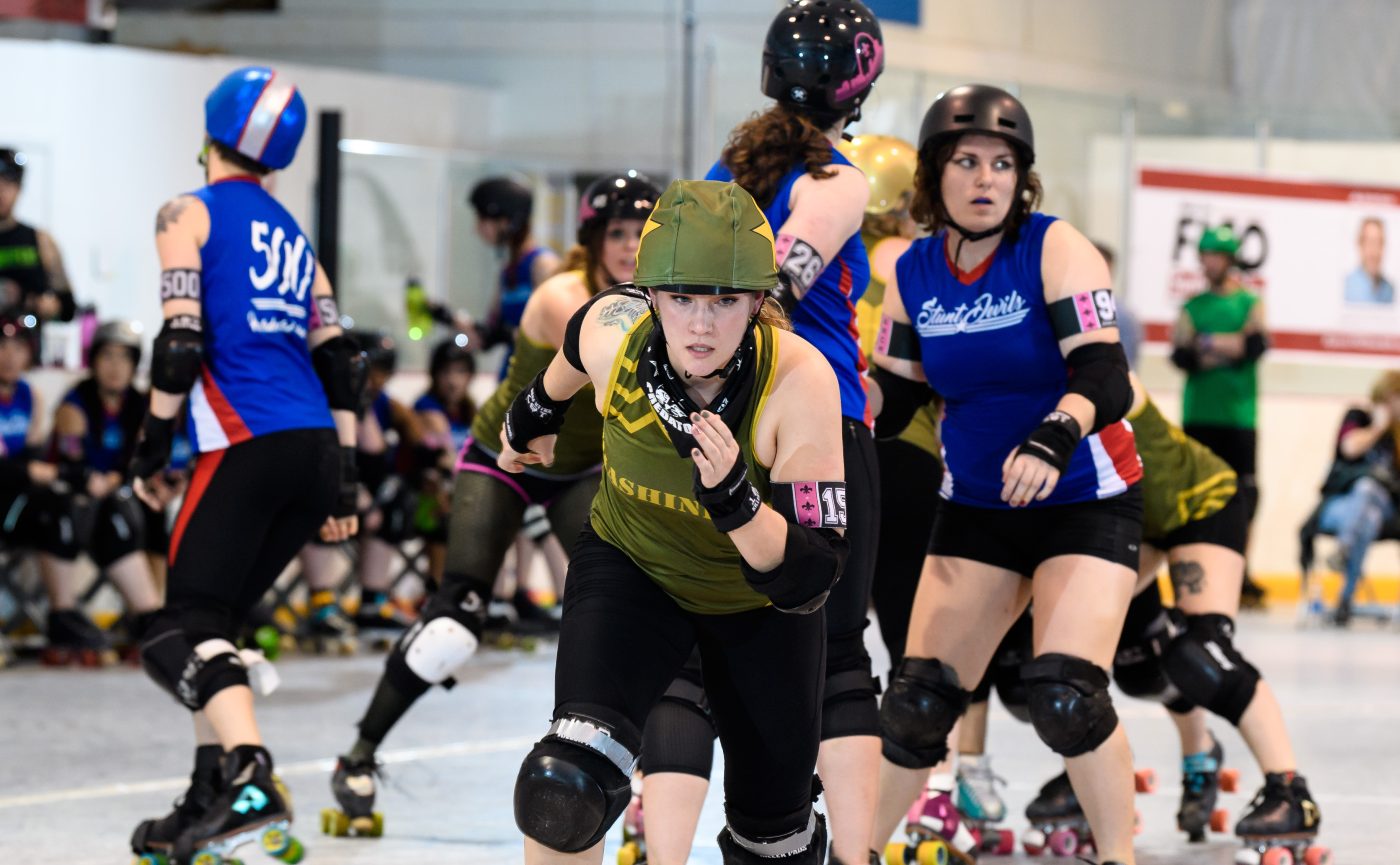 When I joined St. Louis’ flat-track roller derby team in 2016, one of the first things I was told was, “Nobody joins roller derby if they have a perfectly happy life. Usually, they’re dealing with some shit.” That was certainly the case for me. I was 22, newly enrolled in graduate school at Washington University and carrying a lot of baggage.

Having grown up in a Catholic family in the conservative Midwest, my identity as a queer person was met with hatred and disgust. My father thought he was being punished by God. My mother demanded that I change my mind. “No man will ever want you after this,” she said. “You’re giving up your chance to have a family.”

What I wish I could tell my 22-year-old self is that my family was waiting for me inside that crumbling, south-city roller rink. When I discovered Arch Rival Roller Derby, I found a mecca of acceptance — a hub of misfits who celebrated queerness and nonconformity in the loudest way possible. 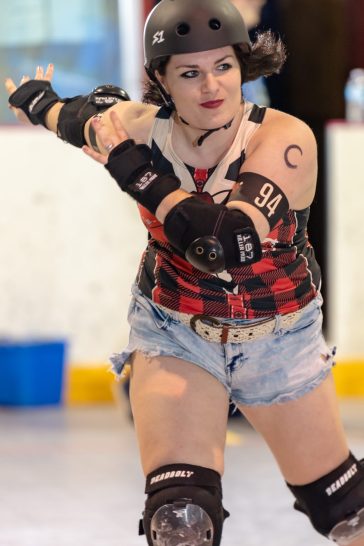 Arch Rival had such a huge impact on me that it became the subject of my memoir, Brace for Impact. My book sheds light on St. Louis’ derby community, its open embrace of people who are literally and figuratively scarred, and how it saved my life as a queer person. St. Louis’ league is representative of the sport’s culture in its acceptance of all identities. Roller derby often attracts people who live on the margins.

When I joined, I knew almost nothing about roller derby except the 2009 film Whip It, directed by Drew Barrymore and starring Elliot Page. The movie gave me a broad overview of the game: There are 10 players on the track at once, five from each team. The jammers, who wear a star on their helmets, are the only players who score points. Their job is to make it through the pack of skaters who are doing anything they can do to stop them. For each skater on the opposing team the jammer passes, she earns a point.

What many people don’t know is that the bouts are not scripted and that playing roller derby requires a high degree of athleticism. I often meet people old enough to remember the ’80s television series RollerGames, a campy show that included an alligator pit in the middle of the track. “Do y’all still elbow each other?” they want to know. “Do you throw punches and hurl each other over the railings?”

Though the rules have changed dramatically over the years, the simple answer is that roller derby remains a full-contact sport. Body checks are part of the game. We hit hard, we fall often and many of us, including me, have suffered terrible injuries as a result. That’s all foundational to the game.

After roller derby waned in popularity in the ’90s, the sport was revived in the early 2000s in Texas. Arch Rival was founded in 2005. Amy Whited-Hylton, known by many by her derby name, Joanie Rollmoan, or simply Romo, was around when it happened. “At the time, there were folks who wanted to be taken more seriously as athletes and others who were here for the pageantry of it all,” she tells me. “The only idea of ‘roller derby’ most of the world had was akin to something like a poorly rehearsed fake wrestling match.”

Queerness, she says, has always been a part of league culture. “There were always a fair number of skaters who fell under the LGBTQ umbrella. The mantra for many of us was, ‘Roller derby made me gay.’”

Many skaters were with girlfriends or seeking girlfriends. Recruiting fliers went up in places like Hi-Pointe, Way Out Club, Frederick’s Music Lounge and Mokabe’s. Except for the last, none of those were queer spaces, but according to Romo, “if you were going to come into any of those places and be a homophobe, you’d quickly get shown the door.” That’s exactly how Arch Rival operated in its early days.

Roller derby is also what brought Romo and her wife, Lipstick Lezgo (Jennifer Hylton-Whited), together for the first time. Lipstick was part of the Jeerleaders, cheering at bouts and performing fun routines but also helping on the administrative side.

When I joined Arch Rival Roller Girls in 2016, the league was undergoing a name change to replace “girls” with “derby.” The gendered language did not represent the nonbinary and gender-nonconforming skaters involved. In recent years, other leagues have followed suit, eliminating words like “dolls” and “darlins” from their titles.

It didn’t take long for me to realize I’d stumbled into a very special community. I felt a surge of excitement on the first day of practice upon seeing that my fresh-meat coach, Ace (Krista Grant), wore a shirt that said, “Sorry, we don’t skate straight.”

I had been the only out person on my college swim team after my girlfriend, Kelly, graduated. After finishing school, we lived in a conservative Ohio town where we didn’t know anyone out. That all changed with Arch Rival. Ace was only the first of many queer people I would meet in training. Boo T. Contusion (Christienne Hinz) was the second — a fellow rookie who, like me, was an academic.

The North Carolina bathroom bill had recently been approved into law when we first met, and Boo was wearing a shirt with the transgender flag on it that said, “You can pee next to me.” In a sport so physical and ruthless, those public statements of acceptance provided me with such a feeling of warmth. They assured me I was in the right place. 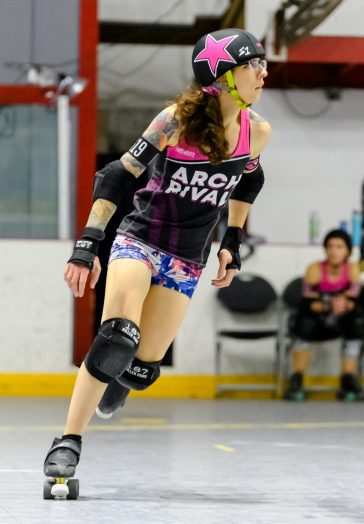 Phoebe Santalla (a.k.a. Scooty Boots) joined the team a few years after I did. A trans skater, she was assigned male at birth. Aside from running an occasional 5K, Santalla never played sports growing up. She thinks of herself as an artistic, spacey and emotional person. “Derby is notoriously queer,” she says, “So I watched my first local game and thought to myself, ‘Hopefully it won’t matter so much what’s in my pants.’”

Santalla doesn’t feel like she belongs most places, but derby is a space where she generally does. “I know that’s as much an internal, personal issue as anything, but also I can’t ignore the social narrative constructing transgender and gender-nonconforming folks and specifically trans women as the ‘other,’” she says, mentioning the surge of anti-trans legislation at the state level and that trans violence seems to be on a continuous upward trend.

“The truth is, I’m often scared to excel [in roller derby] because I’m waiting for someone to pull the ‘actually a man’ card, but I also want other gender-nonconforming folks to witness trans excellence,” she adds. “I think that paradox will only be broken by continued and welcome trans involvement.”

Stephanie Bondhus (a.k.a. Bolt Action), says that if it weren’t for roller derby, she probably wouldn’t have let herself be queer and out. When she moved to Fargo, North Dakota, for college, she learned about the local roller-derby league through a coworker. “I knew it was an open community for misfits and everyone was accepted, and it was all about empowering women at the time. But I quickly learned it was super open and supportive of all identities,” she says.

Roller derby brought Bondhus from Fargo to St. Louis — she wanted to play for a top-level team. When I asked her about bi erasure — the notion that bisexual people are often seen as less queer in some arenas — she stated that she has “absolutely experienced” imposter syndrome when it comes to the LGBTQIA+ world.

“I don’t really feel like I’m certified to be a part of the community because the majority of my partners are male,” she says. “But derby absolutely makes me feel welcomed and that I don’t need to ‘prove’ that I’m anything.”

When everything shut down in 2020, Arch Rival Roller Derby was ranked third in the world. Just weeks before lockdown, I was drafted onto Arch Rival’s All-Stars team along with 19 other badass skaters who had every intention of bringing home the world championship that November. Of course, that never happened, and for two years, roller derby was mostly in hiatus. For the first two weeks after shutdowns, we continued training on our own, hoping things would turn around quickly.

When Arch Rival collectively started understanding and accepting the gravity of the pandemic, we found ways to stay connected with virtual workouts and “small-space skating practices,” where league members would lace up their skates and play around in their kitchens or on the concrete patios in their backyard.

We did a virtual talent show on Facebook Live, which featured over a dozen “acts,” including everything from drag performances to puppet shows. My wife and I earned third place for our intricate yo-yo routine, which we called “Yos and Hoes.” While many of us established new hobbies during the break, such as park skating and indie craft-making, we also eagerly anticipated the return to gameplay.

I spent the first year of the pandemic working diligently on my book, which led to a visiting assistant professor position at the University of North Texas. After my contract was over in May, Kelly and I moved back to St. Louis in time for Arch Rival’s first local game and my book launch. 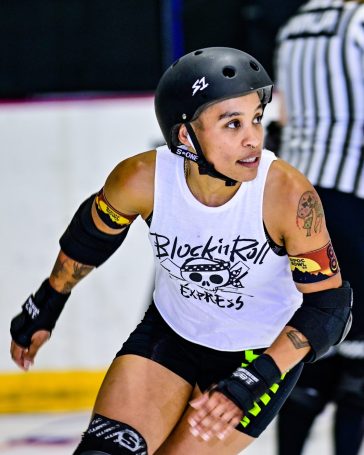 Hart is a skater on Arch Rival Roller Derby. Photo by Bob Dunnell.

Jessica Hart, known simply by her derby name, Hart, was on the 2020 All-Stars roster with me. I was looking forward to playing with her — not only is Hart queer, she’s also an incredibly talented jammer with enviable footwork that made my jaw drop during tryouts.

Like Bondhus, Hart moved to St. Louis to pursue high-level derby. She found Arch by watching competitive tournaments and says she “did not specifically want to be in St. Louis, but it looked nice enough, and I really wanted to skate with Arch.”

Introduced to skating by her father, she’s been on wheels since she was seven years old. Hart’s first job, at age 15, was in a skating rink, and she started playing derby in 2013 while serving a three-year tour for the U.S. Army in Brussels, Belgium.

“For the most part, my queer identity has been very accepted in the derby community,” she says. “I have never been in a situation where I felt like I did not have support. Sharing the track with individuals whose identities fall all across the spectrum adds to the overall acceptance.”

Though Hart is unsure how long she’ll be in St. Louis, her goal is still to assist Arch Rival in bringing home the world- championship Hydra trophy. “I have the opportunity to play alongside jammers who have the experience I do not yet have, but want,” she says.

Scooty Boots, Bolt Action and Hart are only a few of the many skaters I cannot wait to share the track with now that roller derby is officially back in St. Louis. It’s a beautiful community to witness and be part of, and every month this summer Arch will be competing in local bouts at Queeny Park in Ballwin. Everything will be on display — the glitter, the tattoos, the campiness, and the inclusion and acceptance of people with all backgrounds and identities. °

Gabe Montesanti is a queer, Midwestern roller derby player. She earned her MFA in creative nonfictions from Washington Uniniversity. Her memoir, Brace for Impact, is about roller derby.