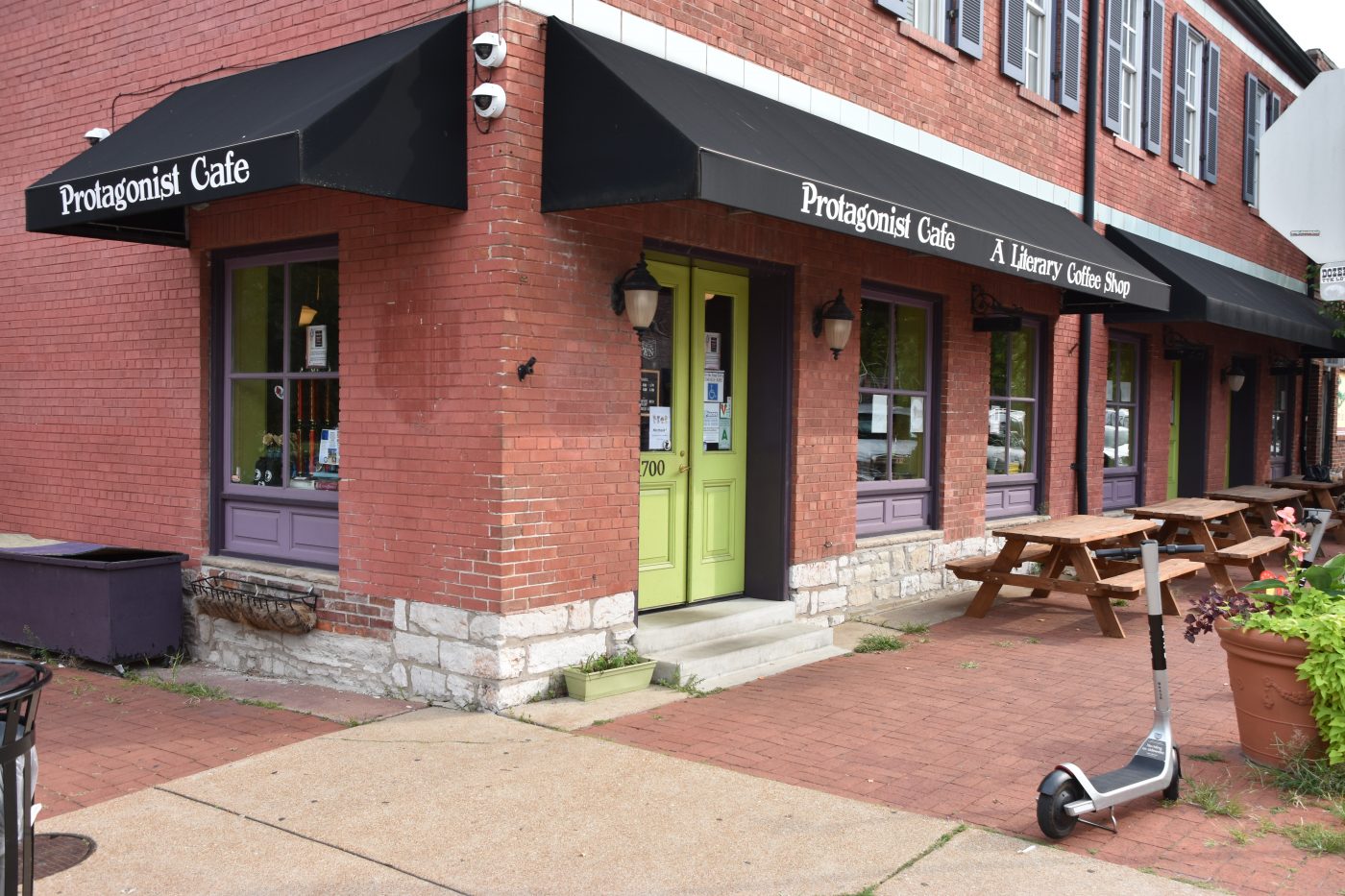 Welcoming Queer Spaces that Exist Outside the Bar Orbit

With the increased closing of LGBTQ+ spaces in St. Louis and across the country, it can be hard for queer folks to find places to feel safe and welcome — not to mention find employment. Here is a small list of wholesome places run by wholesome people who are welcoming and affirming and employ LGBTQ+ people.

Settled directly across from Soulard Farmers Market, Protagonist Cafe flies the biggest and most prominent Pride flag in all of Soulard.

“I think it’s really important to take these stances after the last four years we’ve had,” says Laura Leister, one of the co-owners alongside her husband James Lettau and Ameet Rawal.

That stance seems to agitate some in the neighborhood, as their flag has been ripped down several times in the few years they’ve been open.

“I don’t really know why they keep tearing the flag down. There are a lot of drunk people around here, you know? It’s Soulard. I choose to believe it’s just because they’re drunk.” (These sweet summer children.)

“Luckily the flag poles are cheap to replace at the hardware store,” she says. They estimate they’ve spent around $200 to keep the flag up since they opened in December 2019.

Leister seems to enjoy the feeling of making a difference in this town. “We’re not too vocalized about it; we’re not making posts online about it or anything,” she says. “We’re more about action, with the flag and the way we treat people. I just want to normalize being different kind of people, and hiring different kinds of people, and welcoming them.”

Being from Philadelphia, Pittsburgh and India, the three owners say that in St. Louis they can feel they’re making a tangible difference for people. “In the bigger cities we’re from, you can feel like you’re being swallowed up, but here I know we’re making a difference. We need people who have this different mindset to come in here and make headway normalizing humans and what humans want to be,” says Leister.

They have a blanket policy to make employees and customers feel as safe and welcome as possible and default to they/them pronouns for everyone. They also have a policy to “hire all humans.”

“It’s important to have insight into other peoples’ experiences, so it’s good to hire a diverse staff, so we’ve just defaulted to inclusivity,” Leister says. “I’m interested in normalizing days where we don’t have to have these discussions.”

Indeed, Leister was really more interested in talking about their vegan pastries and book club.

“Our coffee is fair trade certified and organic, too. We’re interested in being ethical all around.”

“We’re a bunch of artists who are terrible at business, I’m shocked we’ve made it this far,” the adorably soft-spoken David Montgomery says with a giggle. “It’s Bric-co-leur, it’s French for handyman, or a person who puts things together from whatever they have on hand,” he helpfully explains.

“It took a long time for folks to find us,” he says of the eclectic antique and contemporary art space.

Isolated at the Cherokee bottoms, he says he and the other owners are OK with being located farther away from the other antique stores on Cherokee Street.

Montgomery had the nicest way of addressing some of their infamously not-as-accepting antique dealing neighbors. “Some folks have been here for decades and have had to see the neighborhood change around them, and they’re really unhappy about that. We love it, though. We’re very excited about the neighborhood.”

As part of their effort at being a good neighbor, Bricoleur offers sensible prices to appeal to the working-class neighborhood. “We love our friends who travel here from outside of the city, but we’re not just making things for them,” says Montgomery. “We have a super diverse customer base, and we love them.”

In fact, much of what they sell at Bricoleur are repurposed, hand assembled and recycled materials they’ve put together themselves, though they feature other local makers’ works as well.

“I’m so excited, we’re going to have one of my good friends’ Pride flag pillows in soon. You’re gonna love it.”

Looking to the future, Montgomery, his sister Ann Montgomery and her partner Andy Holman, all co-owners, hope to have art openings and showcase local artists.

“It may have to look different with COVID, but that’s what we’ve been looking forward to,” Montgomery says. “We also hope that one day we will be a spot for film photographers to learn the art form, and we’ll have a dark room in the basement for the community to experiment and learn.”

While being handed a bag of fancy tea at Teatopia, the illustrious staff may say things like, “Well, these herbs are going to be great for your mental health and clarity, not to mention … oh, don’t get me started!” and you really just want to get them started, but they can’t because they’re too busy, because everyone wants the attention of the tea witches.

“I’m very proud of my employees, one of them has a background in mental health, another one in social work. They take the tea very seriously,” says owner Reginald Quarles. “We have an amazing staff, and I’m happy to say that no one was furloughed or laid off doing the pandemic.”

Undoubtedly, the employees seem very happy to be there.

As we chat, Quarles is emphatically greeted by multiple customers who are all very excited to see him. It’s clear the folks of Cherokee Street love the people in this shop.

“We have an amazing connection with people. It sounds silly, but it’s because we don’t just serve drinks. They say it’s ‘communitea.’ We want people to know that they can be themselves while inside the store.”

Chris Andoe is Ready to Talk

Chris Andoe learned to tell stories in his grandmother’s backyard on the north side of Tulsa, Okla. “I’m from a...