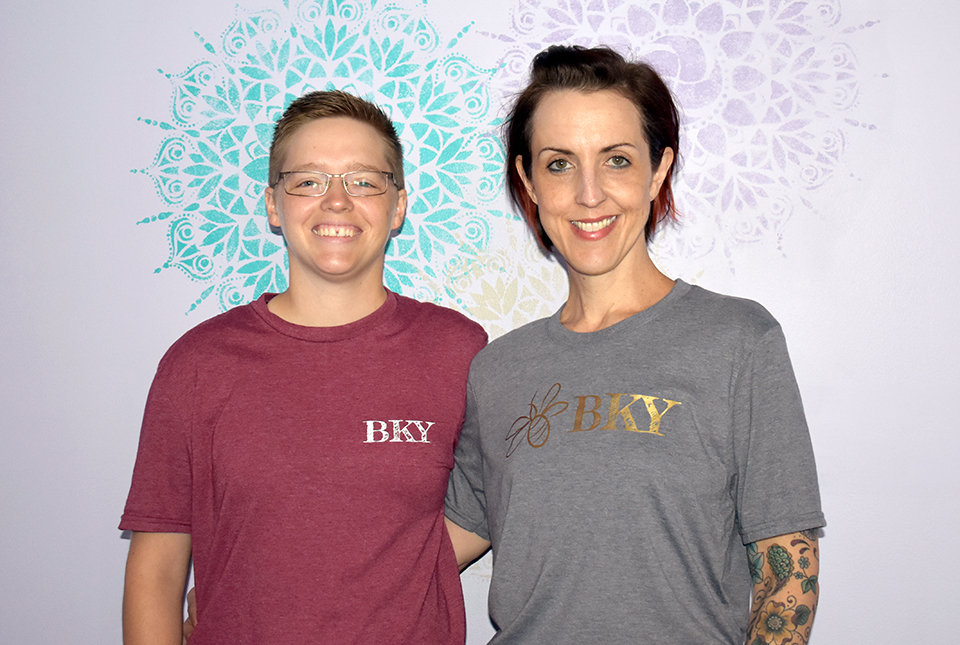 Yoga has come a long way from its origins in centuries-ago India. No longer solely the purview of impossibly twisty young boys bound for the meditative life, it’s moved into something else, and that something — skinny cisgender white ladies in $90 pants, for instance — may not be an improvement.

But one woman in O’Fallon aims to reclaim the magic of the practice for everyone — not just the small, Lululemon-clad segment of humanity she saw represented and idealized in classes she attended as a student.

“Yoga spaces were not being very accessible or inclusive to anybody who was not in that cis-normative body goal,” says Nichole DiGiuseppi, founder of The Bee’s Knees Yoga, which opened August 3. “That’s a lot of people! There were so many yoga studios catering to that one group — what about everybody else?”

DiGiuseppi has been a yoga teacher for five years and a practitioner for many years before that. The inspiration for the studio came from noticing herself as every class’s “only.”

“First, of course, we always recognize our own community. I identify as a lesbian, so I noticed that first — I was usually the only gay person in the room. I was fine, whatever. My wife, though — she would never come to classes with me, not even once. I can pass for straight. She gets misgendered more often, and I totally got it.”

When DiGiuseppi first thought of creating an LGBTQIA-specific yoga class, she figured it had to be old news — one had to exist somewhere close by, right?

The odd studio might hold a single class during Pride month, she found, but there was no consistent, standing class for the community. So she created what she needed, and she guards it — lovingly, but fiercely.

“I had some allies ask if they could come, and I very politely thanked them. I love them, and I said no,” she says. “I just said no, I just want to keep it for the community.”

Allies are welcomed with open arms at every other class on the schedule, she’s quick to clarify. But she’s adamant about maintaining a space for queer yogis.

The studio holds space for lots of other underserved populations, too. In the days following our chat, The Bee’s Knees was set to welcome a teacher with MS who planned a class specifically for those living with the disorder. A yogi who is a veteran will teach a class for those dealing with PTSD and combat trauma. And next spring, the studio hosts a class and workshop led by Amber Karnes, the founder of Body Positive Yoga.

Not so fast, says DiGiuseppi.

First of all, gendered language is out, and body positivity is in. You’ll never hear a teacher start off a class with a chipper “Hey, ladies!” or talk about getting those bikini bodies ready for summer.

Also, teachers demonstrate modifications for every level of ability, and they don’t impose a hierarchy. The “best” version of pretzelasana isn’t the one where a student’s leg is behind their head and their full body weight is supported on one toe — that’s just one version of the pose, and another version where the student makes the shape with their leg moving toward their head with their weight fully supported by a chair is simply another version, not a lesser one.

A huge part of classes at Bee’s Knees is consent, too. Each student has a consent card that informs the teacher if they are OK with touch or not, and the student can change their mind and flip the card at any point in class.

“We have a lot of responsibility as teachers to give that control back to the student,” DiGiuseppi says.

And if a student does consent to contact, it’s really low-key.

“I’m not going to come up to you and shove you into a shape,” DiGiuseppi says. “The touching thing is more like if I wanted to come up and help you get the bolster under your legs.”

Another big part of BKY’s ethos is being trauma sensitive. Trauma-sensitive yoga works to remove triggering environmental circumstances. A pose some classes would call “hands and knees” is known as “tabletop” because “hands and knees” could read as sexualized to a person with trauma. The pose called “happy baby” involves lying on your back, legs wide — even for a person without trauma, it’s a very exposing pose. In DiGiuseppi’s classes, students can get the same effect curled around a bolster. And the ever-famous downward facing dog can be modified into something called “puppy pose,” which keeps a students’ eyes up and forward and cuts down on the presentation aspect of down dog.

There’s no need to mention trauma or call it out in offering the alternate poses, she says.

“I just offer it without explanation,” she says. “People just kind of go with what feels good to them.”

The driving force of all this thought and sensitivity, DiGiuseppi explains, is her notion that no one should be denied the benefits of yoga, no matter what they’ve been through or what kind of body they move through life in.

“The magical part of yoga is where you use the tools, the poses, that help you connect to your breath,” DiGiuseppi says. “We disconnect from our bodies all the time — we’re walking around in our heads. Yoga is for me figuring out how to connect to my body. I feel like everybody deserves that. I don’t care how much money you make or what you look like or what gender you are or what gender you identify with. Everybody deserves that.”

So you want to be queer and weird in Austin, Texas? The progressive blue bubble nestled on the eastern edge...