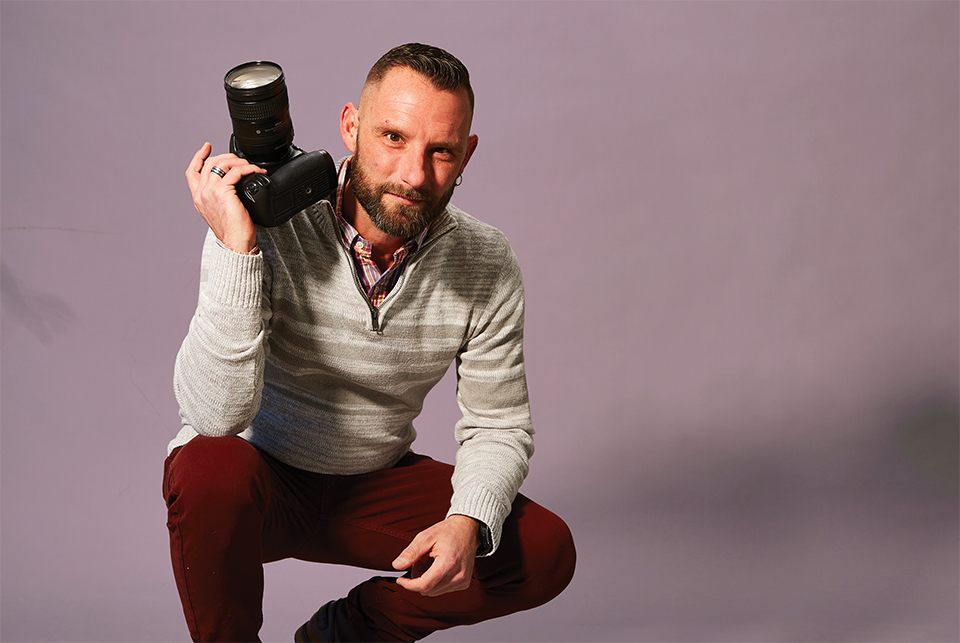 “Taking the time to smile at someone and say hello can change them. Doing something this simple can sometimes make or break a life,” says Mark Moore, whose profile has been rising in the LGBT+ community since 2011. Moore speaks with positivity and high energy during our conversation. We talk about his roles in the LGBT+ community, including as a photographer and organizer.

“I learned to showcase certain people who aren’t normally selected for photographs,” Moore says. “I choose people who aren’t typically in the spotlight, and I look for connections between people and moments of authenticity and bonding.”

Moore’s company, Takemoorepics, has photographed Pride, Mr. Leather and many LGBTQ+ weddings. He directs his team not to photograph the hottest body, but to look for the opportunities that capture the most diversity.
Moore divorced last year, and he needed an outlet for self-healing while rediscovering himself as single.

“I found a happy hour online, and I went and talked with the organizer of the Gay Men’s Social Group, which was pretty inactive at the time. I know lots of people, and I like to be in the know about groups meeting and having events. I became one of the moderators.

“About ten of us keep Gay Men’s Social flowing and moving in the right directions,” Moore explains. “The group is about sparking meaningful friendships with like-minded people, and there’s no age limit or certain status.” Moore emphasizes the Gay Men’s Social Group stands by the premise that it is not a hookup group. The group creates a network for people to participate in organized activities.

“Activities are not always bar-centric,” Moore says,“and we have a Spanish-speaking subgroup, men’s yoga, a book club and gamers that have all come out of the bigger group.” The group also highlights activities in other areas of the metropolitan area including dinners in St. Charles and bowling in Illinois.

“The group also focuses on charitable work. This past New Year’s Eve, we had a successful event that raised money for PAWS,” he says. “That’s the one night everyone wants something to do, but many have nothing to do. Ticket sales were 175 to 200 people. It was casual, no expectations, with a friendly environment to meet new friends. People wore everything from fancy and embellished sports coats to hoodies to shorts. A portion of the proceeds will go toward funding our Pride float,” Moore says.

For the event, the organizers attracted LGBTQ+ businesses to host, design the floral arrangements and DJ.

“I shook hands, talked with and got to know as many people as I could, even though I was working, and we plan to do it again next New Year’s Eve,” he says. In February, the group hosted a Valentine’s dinner at the Spaghetti Factory for 50 couples and singles.

More than a decade ago, this upbeat and energetic man directed his attention, time and talents to his hometown LGBTQ+ community. With hard work, determination and a philosophy of just being kind, smiling and meeting people, Moore has become a key figure in the St. Louis LGBTQ+ community.