If all you know about Lea DeLaria is her gimlet-eyed prison persona Big Boo on Netflix’s Orange Is the New Black, well, truthfully, you’re off to an OK start. Boo brings butch sexiness into the mainstream in a way we haven’t much seen before, which is quite cool.

But there’s so much more to know!

DeLaria grew up just across the river in Belleville, Illinois. A multifaceted artist who has been collecting Theatre World and Screen Actors Guild awards since the 1990s, she’s also won plaudits as a jazz singer. Her 2015 record House of David consists of jazzy updates to David Bowie’s catalog.

This Christmas, after you open all your goodies, you can unwrap one more gift from DeLaria: On December 27 and 28, she’s doing two sets each night at Jazz St. Louis. Her show promises bits of comedy interwoven with songs from her latest album.

Out in STL caught up with DeLaria to talk about lesbian dreams, Bowie, Sicilian rage, Trump, weird jazz and how much things have changed in our little corner of the world.

Out in STL: What was it like for you growing up queer in Belleville?

Lea DeLaria: I went to grade school, K through eighth, at St. Mary’s. I was originally supposed to go to Notre Dame for high school and live in the dorms. I was going to live in the dorms at an all-girls Catholic high school! That’s like a lesbian dream! The month I was supposed to start, the school got condemned and closed. I think God was saying “no.” I went to Belleville West.

I had the luck of having a couple of very smart parents who encouraged me to be who I am. Not everybody has that. My parents, even though they were Catholic, both of them, which is not generally very good for us queers, they were able to see past it, and were able to listen to me and grow. I listened to them.

The Red Bull, I think, was the dyke bar in East St. Louis, around the corner from Faces. That was my first gay bar. I was underage; I had a fake ID. I walked in there and I was like, “Wow, I think I know who I am!” I actually fit in there.

I went to my first gay pride parade and it was in St. Louis. It was the first one. The person I was with wore a fuckin’ mask; that’s the way it was. I was arrested in Missouri for open and notorious homosexuality. I spent the night in jail.

And now there’s a gay bar in Belleville. I speak at universities and high schools now. They have me speak! At high schools! Come on! They have clubs!!

What led you to do an album of David Bowie covers? Was it weird for you that he died just months after your record came out?

When you’re a little queer in Belleville in the 1970s and David Bowie comes out in a skirt singing rock and roll, you gotta go “What the fuck?” He was very instrumental for all of us little queers in those days. He was the boss.

He was very significantly helpful with this record. My label, Warner Jazz, doesn’t exist anymore. I started this process with the label and the label went under, and I had to do a crowdfunding thing. David Bowie was incredibly supportive. I honestly felt like I killed him. It was so strange.

You’ve been a vocal critic of the White House’s current occupant. How do you keep your head up?

We’re dealing with an administration that is basically a hate crime. A lot of people are feeling distraught by it, but I like to keep my eyes on what’s actually going on. We have to look at our progress. Sometimes it’s very ugly progress.

I’m getting fucking rageful! All you have to do is read the asshole’s tweets every day. I stay rageful because I’ve always been rageful. Some people are just a little too middle class and a little too, oh, polite. They don’t get it. I am way too Sicilian. I am fucking Sicilian and I know that rage gets things done.

How did you get into jazz? What should we expect from the show?

My pops was a musician. That’s how. When he saw that I was into it, he taught me. I would sing with him.

This is my first time playing Jazz at the Bistro. I have a very special guest, Janis Siegel from the Manhattan Transfer. She has nineteen Grammy nominations and nine Grammys.

I’m coming out with an all-chick band because I think it’s really important in the face of the sexism we are dealing with right now. If I’m going to get work, I’m going to give it to my sisters. All women. It’s going to be a girls-rule concert. 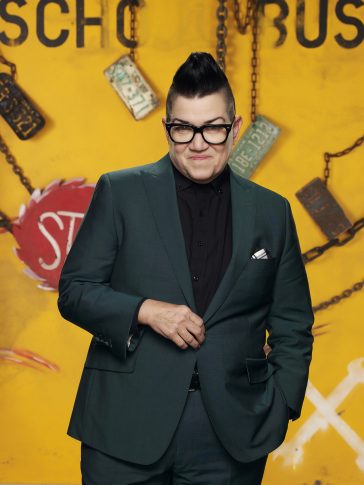 Is it frustrating to be so accomplished in jazz and have most people chiefly know you from TV?

Since Orange, I get a whole lot of crossover now. I’ve done Conan a whole lot. I’ve sung every time I’ve been on Conan.

Jazz is really dying out. Part of the reason is they do the same 50 fuckin’ songs over and over. The American Songbook is great, but it’s not the only songbook out there. Kids don’t wanna hear that. If you look at the oeuvre of albums I’ve put out, you’re only going to see one American Songbook. I do weird jazz because I’m trying to entice younger audiences.

Anything else we need to know?

Twenty years ago, I was living in Oklahoma City and decided to spread my wings and move to a larger...