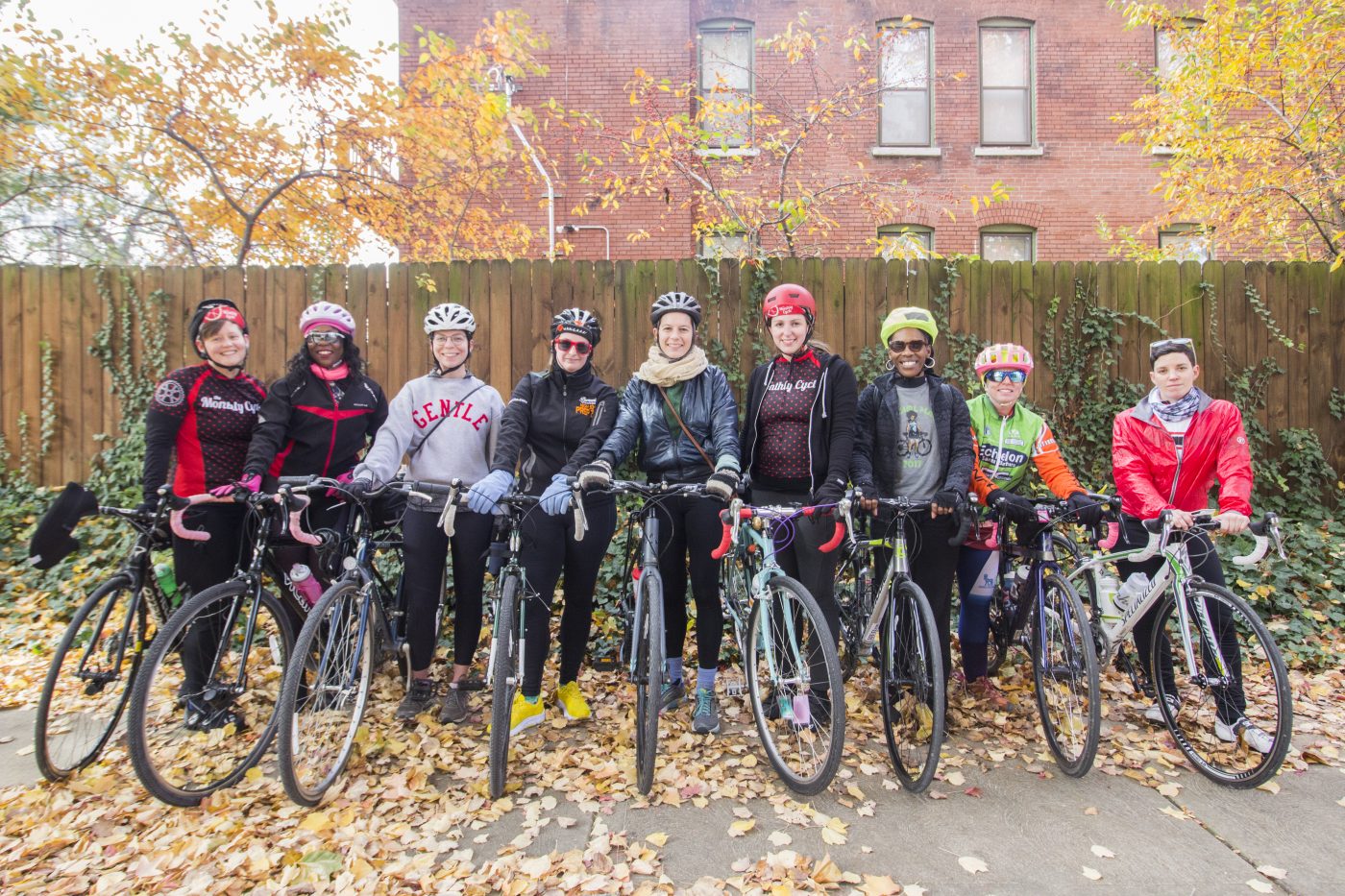 Death. Taxes. Dudely bro-dawgs monopolizing bike rides. Some things you must endure, but others you can adjust.

For more than four years running, a group of women has converged on the first Monday of every month for a social bike ride: the Monthly Cycle. They pedal a different fifteen-mile route each time through a mix of city neighborhoods. Formed specifically to welcome women and new riders, the club has grown into a space for all women, including trans and gender-non-binary folks.

It all began with cyclist Courtney Cushard, who in the days before Monthly Cycle had been attending social rides and rides sponsored by bike shops, in addition to racing and commuting.

Something stood out to her.

“It’s not always welcoming, I’ll say that,” echoes cyclist S.J. Creek. “Cycling as a whole is a big broad diverse group. There are definitely a lot of cis white men who are most visible as cyclists. They dominate cycling threads, they dominate in groups.” 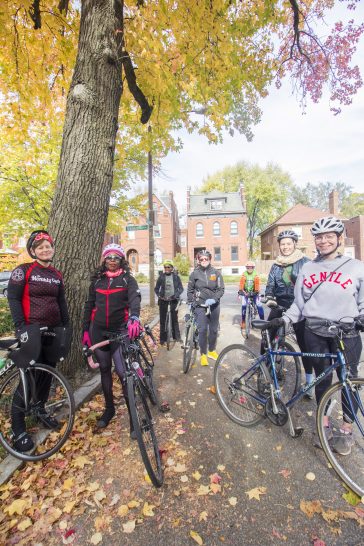 So in 2013, Cushard put the word out: Once every 30 days, women should meet at the Gelateria del Leone on South Grand Boulevard at 7 p.m. and go for a bike ride. The group has been going strong since then. (Keep an eye on their Facebook page for information about rides in nasty weather.)

Beyond just the rides, Monthly Cycle has expanded into special events, such as partnering with bike shops to teach women basic bike maintenance. It’s a kind of information sharing and self-sufficiency that calls to mind St. Louis’ Women’s Car Repair Collective, a group of feminists who set up a garage near Jefferson Avenue and Arsenal Street in the 1970s so women could share tools and skills without having to depend on men for auto maintenance.

“Cycling, like so many other sports or other things in general, is super male-dominated,” says Cushard. “It’s always this tiny section of the bike store that has women’s stuff in it, or there’s one female employee and she’s a salesperson or cashier. There’s not really a space for people that are not men to go and do that kind of thing.”

A few years in, the group was challenged to stretch their definition of “people that are not men.”

When Creek heard about Monthly Cycle, it seemed like it could be a great space for social biking. Creek noticed a handful of queer friends talking online about participating in the ride and decided to go for it.

“I just sort of joined,” says Creek. “I was stealthy, not talking about pronouns or anything, just doing the ride.”

After about a year, with hopes of exiting stealth mode, the cyclist approached Monthly Cycle leadership, asking if there was room for trans and non-binary people. The leadership was a little surprised by the question but immediately receptive — and even asked Creek to join the governing board.

“We did not have the language or knowledge about the gay or transgender community and about their needs,” says Cushard. “It obviously became something really important to our mission, to expand not just to women but anyone that identifies as a woman.”

Both Creek and Cushard say there are ways to widen out the group even further. Cycling can be an expensive pursuit, so it’s important to let people know they can show up on a $50 Craigslist bike and the clothes they wore to work and join the ride.

Being accessible to all levels of physical ability is a challenge, too. Cushard, a racer, at first wanted the ride to be fast — but realized the riders wanted a slower, more social pace. The sport requires some level of ability, so it’s not possible to be completely inclusive. 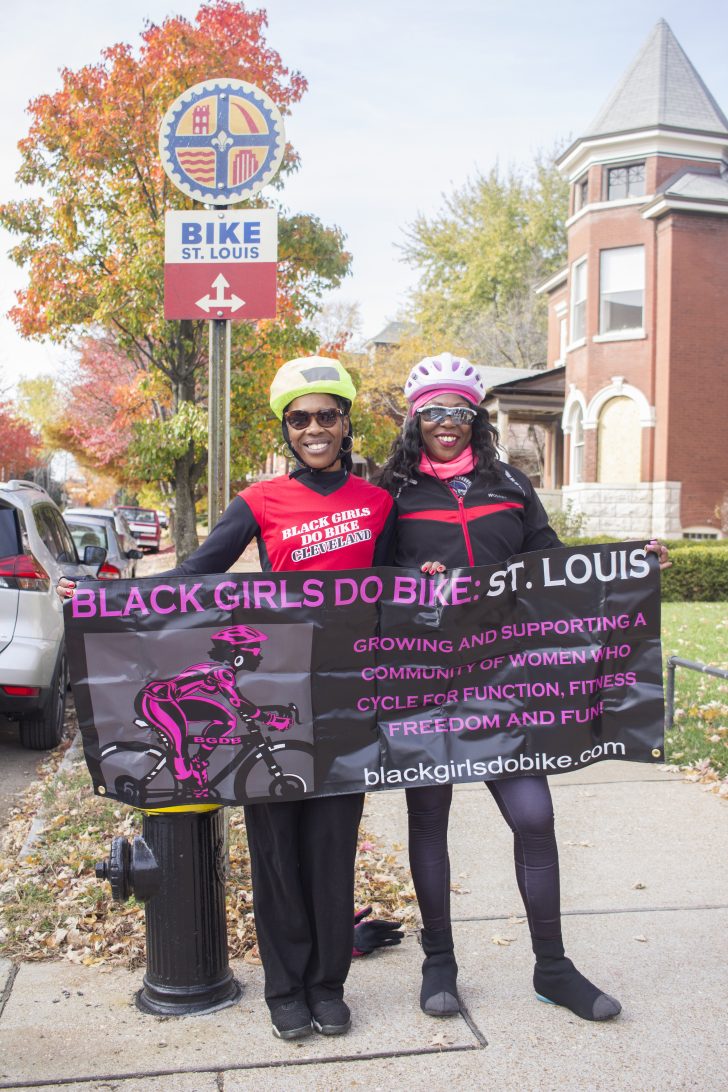 It’s also crucial to reach out to cyclists of color. Creek says it’s incumbent upon the Monthly Cycle folks to be proactive.

Monthly Cycle is hoping to join with the St. Louis chapter of Black Girls Do Bike for a social ride.

“I think all of us want to find community and space in the world where we can just ease in, not feel the static or the pinch,” says Creek.

Melissa Meinzer is the associate editor of Out in STL. You can reach her at [email protected]