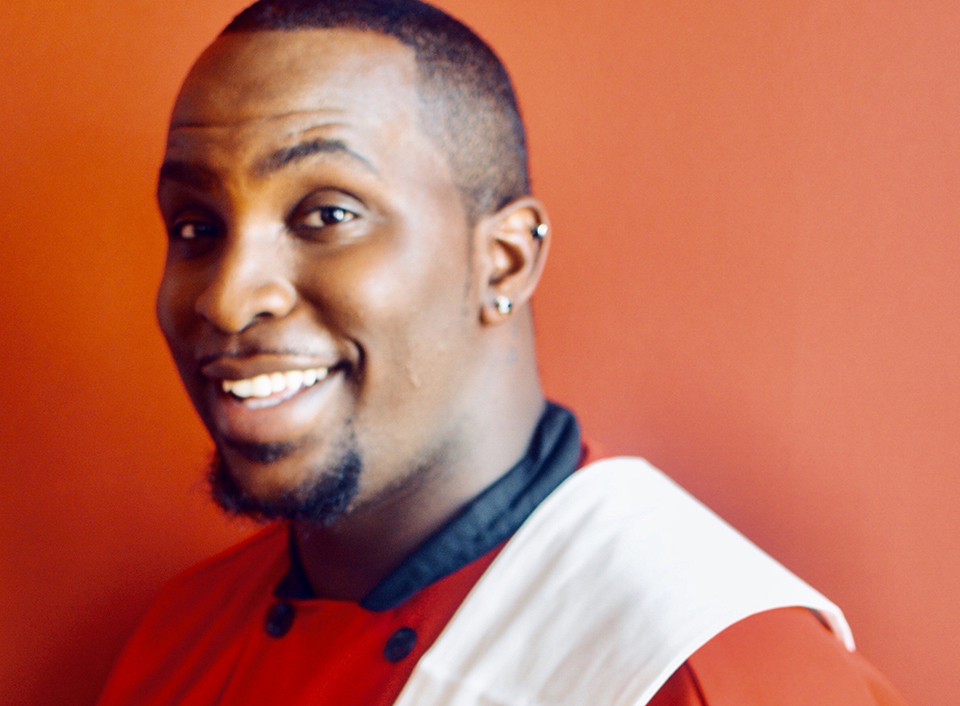 It doesn’t take long for a conversation with Curtis McCann to become a conversation about entrepreneurship. Striking out on his own was an important step for McCann, 27, who launched Catered by Curtis LLC a little more than a year ago. But it’s also a big part of how he helps others.

He defines the term in a way that’s deceptively simple. “An entrepreneur is a person who has great faith in something, hopes it will work out and has the courage to keep trying,” he says. “It’s saying, ‘I have a great skill set. I’ve applied it to corporate settings, and now I’m going to apply it to my own thing.’”

McCann says the roots of his work can be traced to his childhood in north St. Louis County, where he was part of a large family with unapologetically southern sensibilities.

“I was a greedy kid,” he says. “I was always super hungry. When other kids were outside playing, I would sneak into the kitchen and watch my aunts and uncles cook.”

Watching their recipes come to life was like watching art happen, he recalls.

“You can mix nutmeg with clove and then mix some whiskey in and have an amazing taste, and who would put that with candied yams?” he asks, his already expressive face even more so thanks to his enormous smile and the even larger laugh that follows. “My grandmother!”

In addition to his grandmother, who put no fewer than twenty pies on holiday tables, McCann learned from watching his six aunts and three uncles. His uncles were the barbecue and potato salad guys. His aunt Stacey made the best catfish while another made the best macaroni, a recipe he says she still won’t give up. “I make a pretty good second,” he says. (McCann doesn’t give it up either, except to say the secret ingredient begins with the letter P.)

“The seasonings, the marinades, everyone had their own little unique thing that makes every recipe different,” he says. “I thought it was amazing.”

A little more than one year into his own venture, there are already many who consider McCann and his work amazing as well.

Working full time in retail, McCann began asking himself why he was working so hard to generate great results for a gigantic company rather than doing it for himself. So last October, encouraged by friends, he left his job and, to cover the food and the venue, sold tickets to a tasting event he’d organized. “People wanted to see what I could do,” he says. “Most people knew me as Curtis who works at Target. But then they thought, ‘Wow, he can really cook.’ My family knew it, but it’s good to get reinforcement from others.”

A few days later, McCann catered his first official event, and it’s been nonstop ever since. “Word got out way more quickly than I would have ever imagined,” he says. “I was expecting a repast or some baby showers. I wasn’t expecting to shake hands with some of the people I’ve worked with during my first year.” McCann’s client roster currently includes Fox 2, Hoffman Brothers and Parallon.

McCann says he’s happy to create items based on what clients want — he made pasta out of almond milk recently, for example. But he’s developed a detailed menu that’s reminiscent of the kitchens he grew up in. Popular items include the mac and cheese and voodoo pasta, which he describes as almost a gumbo. “I’m from St. Louis,” he says, “but I have a great admiration for creole-inspired food.”

In turn, his clients — he has about 60 — admire him enough to keep him busy on a full-time basis, with gigs every weekend and pop-up shops on a mostly weekly basis, including a recent vendor pop-up, which McCann describes as entrepreneurs collaborating and pushing their brands out to the public.

McCann says creating recipes is his favorite part of running his own business. The mac and cheese is a perennial favorite, he says. He enhances it with various spices and a heavy, hearty roux. His candied yams, spiced with honey garlic, are also popular.

McCann likes his menu, but when it’s time to eat, he keeps it basic. “I’m a simple St. Louis boy,” he says. “I love an Imo’s pizza. I go to Fitz’s on the Delmar Loop to get onion rings and a milkshake, and I’m good with that.”

For now McCann rents a kitchen downtown, a setup he says is fairly common in St. Louis since entrepreneurship is on the rise. Rather than focus on the inevitable increase in competition, he sees more people entering the industry as an improvement in the area’s mental health. “People don’t leave their jobs, they leave toxic work environments,” he says. “Entrepreneurship is picking up because people are excited about controlling their own narrative — waking up in the morning, thinking this is what I want to do and then being happy doing it.”

He’s also looking to open a brick-and-mortar spot in the near future. “I have some great spots in mind,” he says. He hasn’t settled on an exact location but says he really likes south city, adding, “It has its own little heartbeat.” He’s currently leaning toward a very nostalgic, southern restaurant with long tables, interesting artwork and a family vibe — all of it grounded by the aroma of fresh-baked dinner rolls. He plans to continue catering as much as possible. There’s certainly a demand for it, given that lots of people don’t want to spend time in the kitchen cooking for large groups.

At the same time, he’s equally committed to continuing mentoring and other volunteer activities. It isn’t hard to get McCann talking about mentoring or his support of an annual weekend event that takes place each October on the University of Missouri-St. Louis campus called The Forum, which he describes as a celebration of minorities that shines a light on the health disparities communities of color continue to experience.

But he steadfastly refuses to link his business with his volunteer work. He cooks for clients; he volunteers to help people with whom he empathizes. Other than occasionally employing young people as servers, the two worlds remain in their own orbit in a way that’s refreshingly free of feel-good buzz phrases like “giving back.”

“I became interested because I have friends who are social workers, community outreach specialists, people who do testing,” he says. “They inspired me to get involved.”

McCann’s own experience also motivated him to volunteer on behalf of young people: Although they’ve long since reconciled, his mother kicked him out of the house when he came out to her. “Homelessness is still a big deal in the LGBTQ communities in general, affecting people of all colors,” he says. “Being shunned by your family is universal.”

McCann tries to help youth who are homeless with challenges that arise because they don’t have insurance and to guide them toward jobs and personal development opportunities.

Including, of course, entrepreneurship. “I look at it as a way to show people a better outlook on life,” he says. “I encourage them to follow their goals and dreams, even if they don’t make sense to other people. No one tells you to start your own business when you’re younger, so I do that.”

Carrying a Community: the Journey of Pastor Tori Jameson

Pastor Tori Jameson’s life had long been trending toward their unique place as a pastoral care provider for the queer...