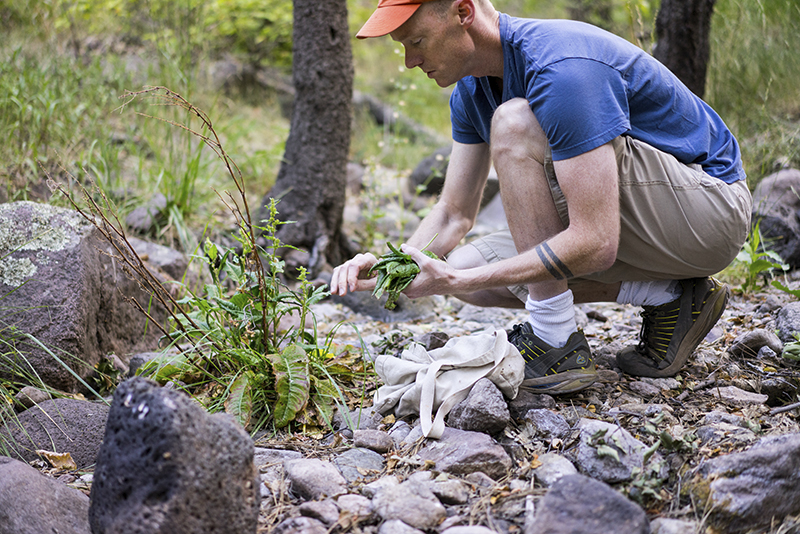 It’s hard to believe chef Rob Connoley when he says he doesn’t like beets.

Consider his “Rolled Roasted Roots” dish. He uses the core of a red beet like the veal shank in ossobuco, then slices the remainder of that beet — plus a golden one — into thin strips, which he wraps around the core. He serves it atop a chickpea cake and finishes it with bechamel sauce.

Still, he insists: “I could care less about beets.”

So why does Connoley, a James Beard Award nominee famous for using foraged ingredients, bother to gussy up these earthy roots?

His husband, Tyler, loves them. 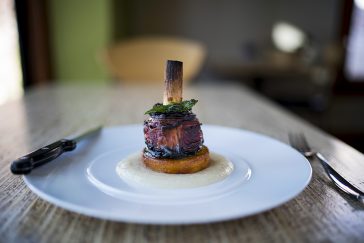 Connoley first made the dish years ago at the Curious Kumquat, the destination restaurant he used to run in Silver City, New Mexico. It quickly became one of Tyler’s favorites. And what began as a labor of love now promises to fit perfectly into the sort of cuisine Connoley plans to serve at his upcoming restaurant, Bulrush.

“I don’t like wimpy, light vegetarian dishes,” says Connoley, a Bridgeton native who moved back to the area last year. “I was in a ranch and mining town before, so I had to make sure that the food would satisfy people.”

He found that even when he put beets in a chilled salad, they punched above their weight: “Your body reacts to them like meat.”

The Connoleys first crossed paths seventeen years ago in Indianapolis, where Tyler, a United Church of Christ pastor, was in a seminary program. Rob Connoley lived there too. When they met, he had just returned from a mountain-climbing trip in Peru and “wasn’t looking for a relationship” because he was again planning to leave the country.

Tyler persuaded him to stay, and they had a religious marriage ceremony within the next year. (The two are now legally married.) In 2004, they moved to New Mexico because Connoley took a job to start a nonprofit aimed at providing uninsured people with access to healthcare. A few years later, he decided to switch career tracks and become a chef. He opened the Curious Kumquat in 2008 — but it presented a domestic problem.

“We found out that instead of us having dinner together at home every night, I would be at work until nine or ten, which meant he was at home having dinner by himself,” says Connoley, who is 49. So Tyler started coming into the restaurant for his evening meal. 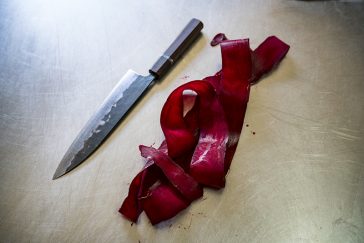 “I have just always loved beets,” says Tyler, 47. “There’s something about the earthiness and the sweetness.”

The first time Connoley made the dish and sent it out to his husband, he heard a loud “squeal or chirp” from the dining room.

“Half of me was happy that I got the right dish for him,” recalls the chef. “The other half was thinking, ‘You need to be quiet; there are customers out there.’”

Tyler, whose job now involves helping immigrants get housing, clothes or legal services, says of the dish, “It’s just amazing to look at; it’s just so beautiful. And it was exciting that it was a whole dish of beets.”

Tyler often serves as the primary taste-tester for the dishes Connoley is developing. At Bulrush, which is expected to open early next year, Connoley plans to base the menu around ingredients that he has foraged.

As the author of Acorns & Cattails: a Modern Foraging Cookbook of Forest, Farm & Field, Connoley has been doing pop-up restaurants and charity events around St. Louis since his return. He spends a couple hours each morning hiking on public and private land outside the city, searching for blueberries, wild mushrooms and sumac. When he comes back, he says, “my legs are completely cut up and scratched and bloody.”

As for the “Rolled Roasted Roots,” he says he would be surprised if they don’t show up at Bulrush, if perhaps in a slightly different format. “You know I can’t serve my old stuff!” he points out.

Not that Tyler would complain. 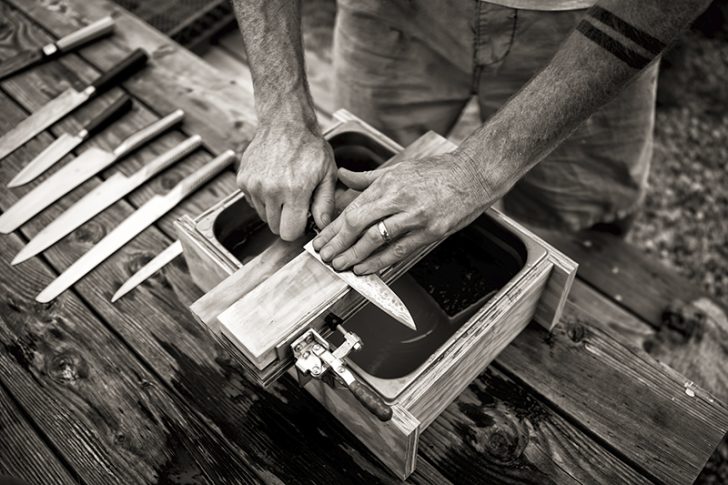