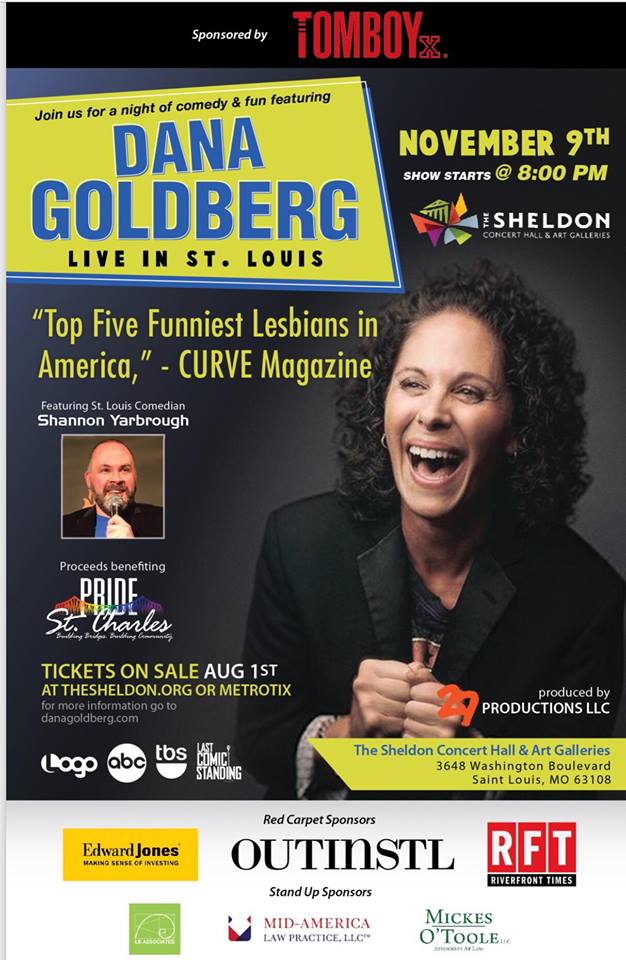 Dana Goldberg‘s humor is smart, witty, edgy, sexy and packs a political punch. She hits the stage at The Sheldon Concert Hall on Friday, November 9th.

With midterm elections rushing around the corner like a reporter with a leaked story, by the time of the show we will either be celebrating momentum or drinking in angst. Whatever the outcome, an evening with  Dana Goldberg will be just what the doctor ordered.

“Well, since the show is the Friday after the midterm elections, we’re either going to be having a party and celebrating or we’re going to be having group therapy. I really am going to see how things go on November 6th before I write my show. Either way, it’s going to be a hilarious night,” says Goldberg.

Raised by a “wild pack of Jews,” otherwise known as her mother and siblings, Goldberg’s timing and tongue-in-cheek edginess is why she continues to collect loyal fans in cities all over the world.

For a taste of what to expect, check out Goldberg’s DVD, “Dana Goldberg Live! Hot & Bothered,” her album “Crossing the Line,” or catch her on the Logo Network’s One Night Stand Up. Follow her on Instagram and Twitter, too.

Goldberg has performed in numerous high profile comedy festivals and clubs including The Edinburgh Fringe Festival, David Brenner Presents: “What’s so Funny” in Aspen, Colorado, and The San Francisco Comedy Competition, just to name a few. She is also a regular on the popular lesbian cruise line, Olivia.

She is the host and producer of the Southwest FunnyFest in Albuquerque, New Mexico–one of the most successful comedy events in the Southwest. She has worked with several national organizations including the Ms. Foundation for Women, We’re Funny That Way Foundation in Toronto, Canada,  and Human Rights Campaign organizations across the country including in St. Louis.

“St. Louis has an incredible LGBTQ community that comes out and supports each other,” she says. “That’s what I want to see in the audience, a diverse group of people who just need a break from the insanity and want to laugh.”

Goldberg has helped raise more than $6 million to fight for LGBT communities and organizations across the globe, raising awareness for the ongoing fight for equality, women’s rights and fighting for HIV/AIDS funding, research and awareness.

A portion of the night’s proceeds will benefit Pride St. Charles.

This story is an update to Dustin Does Dallas. After years of getting off easy in St. Louis there was...