After years of volunteering in other capacities, Jolene Gosha will be running the 2018 St. Louis Pride Parade. The board’s big vote of confidence comes on the heels of many personal and professional triumphs for Gosha in the past year, after reclaiming her life from alcoholism that once felt all-consuming.

A few short years ago Gosha orchestrated her own one-woman march nightly from her Grove apartment to her favorite haunts along the strip. There, the laughter and good times would often devolve into angry tirades as the night wore on. She’d shut down the bar and stumble home — and rarely remember the journey. Sometimes she’d wake up outside, and it was one of those mornings she considers her rock bottom.

The sun had been up for a while when Gosha came to in the front yard. People were walking their dogs, and through a plate glass window she could see an employee in the paint store across the street. She had no memory of anything past midnight. The lack of clarity on what transpired the prior evening spurs a sense of dread familiar to every heavy drinker, where your stomach sinks as you wonder what you said, did, or (shudder) posted. She scrambled to find her phone only to discover the battery was dead.

“I flailed to the paint store, half drunk, and asked if I could plug my phone in,” she recalls. When she was able to review the drunken conversations, it wasn’t pretty.

“That was the moment my friend group fell apart,” Gosha says.

Gosha says she left her day job in 2015 to become a full-time partier. “I surrounded myself with alcohol 24/7. It was my work, my play and my life. I lived to drink and drank to survive. I wasn’t living though, I was existing.”

Years earlier she saw a friend posting on Facebook about sobriety, and after that rough wake-up call, found herself contemplating it. “Until that post I had no clue that was even a thing,” says Gosha, a native of O’Fallon, Illinois. “Where I came from you were either in church, and didn’t drink because of Hell, or out of church and did whatever the hell you wanted.” She knew she needed to quit drinking at some point, but deluded herself into believing she was effectively maintaining.

Meanwhile, the alcohol was talking a severe toll on Gosha’s health, with worsening kidney issues, visibly thinning hair and thoughts of suicide.

Gosha’s rock bottom lasted for weeks. On May 5, 2016, she was hospitalized for a variety of issues, from severe back pain to kidney problems to dehydration. After being released May 8, she made a beeline for the bar, despite strict orders not to drink while on pain medication.

“I went hard, blacked out, woke up on my porch the next morning, called a friend and moved away from the Grove and the city,” Gosha says.

The long climb back wasn’t easy, and wasn’t out without setbacks. “I struggled for months,” she says. “I’d make it 15-20 days but I could never make it to the three-week mark without a weekend of binge drinking. I lit my cigarette and messaged someone I looked up to who had been sober for decades. I asked, ‘Is it normal to relapse? I’m really struggling.’ She said, ‘Oh kid, yes it is, but if you don’t like the choices you’re making, then every day is a new day to make better choices.’”

On April 9th, 2017, Gosha woke up knowing she’d had her last drop of alcohol. “I called my friend and went to her place for a couple of days because I couldn’t be alone,” she says. “I regrouped, went back home and began focusing on what I wanted in life instead of focusing on my toxic best friend, alcohol.”

Gosha first volunteered for Pride in 2010, and developed a passion for its behind-the-scenes action. “I’m very excited to continue working with the parade; it’s my favorite day of the year,” she says. “To see thousands of humans come together is a beautiful sight.”

Expect some “new and exciting stuff” from Pride’s Parade Committee, headed by Marty Zuniga. Gosha says, “We’ve listened to the community & we’re actively changing some things up after taking into consideration suggestions from parade participants, spectators and volunteers. Many volunteers from previous years will be returning so there’ll be a lot of familiar faces.”

For nearly a decade, despite her personal struggles, Gosha was able to deliver during Pride. But she’s finally got the rest of the year covered as well, with a spacious flat where she regularly hosts big dinners for her many friends, just a block from Tower Grove Park, and a job she loves managing an upscale apartment building. “This has been a year of growth and promotion for me,” she says of what is now fourteen months — and counting — of sobriety. “It’s a lot to take in, but very exciting at the same time. I still can’t believe this is my life.” 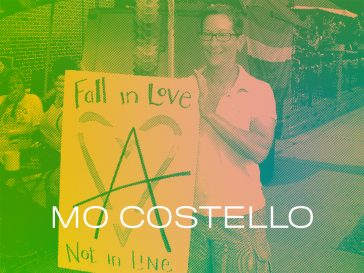 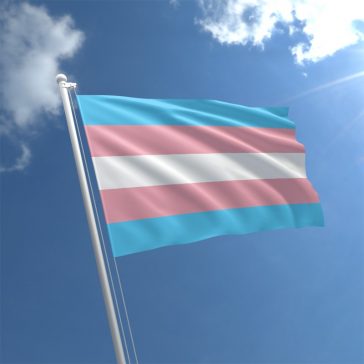 If you went to Tower Grove Pride last year, maybe you saw a quietly revolutionary booth. It hoisted pink, lavender...